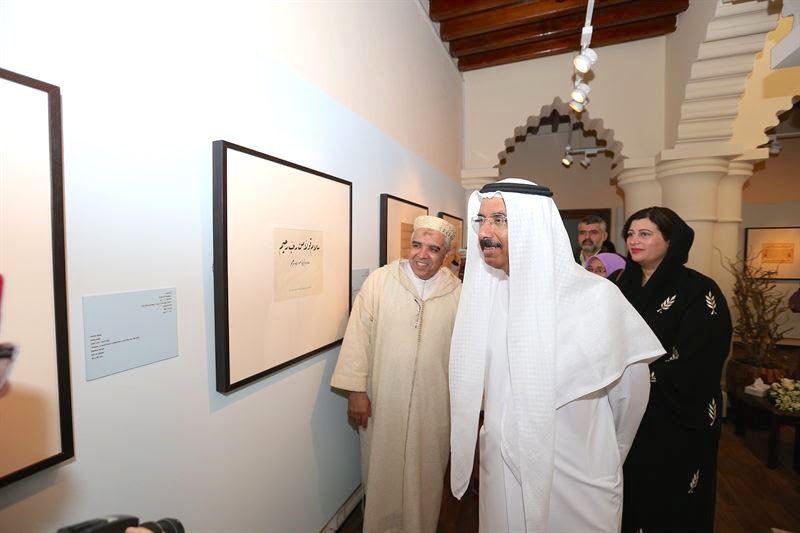 Each of the women are former students of the world-renowned Moroccan artist and calligrapher Belaid Hamidi, who certified hundreds of international students while teaching the art form at Al Azhar Mosque in Cairo.

Running from 22nd December 2016 to 3rd March 2017, the exhibition gives visitors an opportunity to appreciate more than 50 poems and verses from the Quran beautifully crafted in various styles of Islamic calligraphy, including Kufic, Naskh, Riq’ah, Diwani and Ta’liq.

Mr Hamidi, who is one of the world’s most respected and highly-decorated calligrapher, will give lectures and specialised workshops during the exhibition on the practice of calligraphy and its importance to Arabic heritage.

“As such, we are honored to welcome such a highly respected calligrapher in Belaid Hamidi, and look forward to introducing visitors to his talents and to the fine work of his international students. This is a not-to-missed opportunity for those who appreciate Islamic art and calligraphy to learn from the true greats of the practice.”

Islamic calligraphy has a well-established heritage in Southeast Asia. When Islam reached the region, individuals started to learn the language of the Holy Quran and to adopt the art of calligraphy.

Mr. Hamidi played a significant role in raising the standard of calligraphy among Southeast Asians. In 2008, he began teaching the theory and practice of calligraphy to foreign students at Al-Azhar Mosque in Cairo. His efforts helped to raise a generation of masters of calligraphers who transported the art form to their countries by opening Arabic Calligraphy schools in Indonesia, Singapore, Thailand, China, Malaysia, and other countries.

“The work of these 12 talented women should serve as an inspiration for women throughout the region and beyond to learn about an art form that is so vital to the long-standing appreciation of Islamic art and heritage.”

Mr. Hamidi and the 12 female master calligraphers will be conducting a series of workshops on December 23-24 that cover the basics of calligraphy, as well as methods of teaching calligraphy to non-Arabs.

For more information on the exhibition and workshops, please visit www.sharjahmuseums.ae