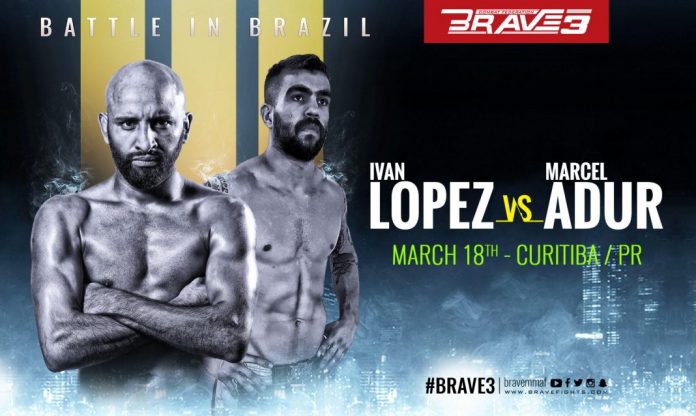 Brave 3: Battle in Brazil takes place March 18 in Curitiba. The entire event will streams on BraveFights.com, though the exact bout order hasn’t been finalized yet.

The event will be headlined by a much anticipated 5X5 non-title featherweight bout pitting Lucas “Mineiro” Martins (16-3) against Paulo “Bananada” Goncalves (21-11).

Mexico’s Ivan “Niño Demoledor” Lopez fights for the second time under the Brave Combat Federation banner. Most recently he fought Jessie Rafols at Brave 1 “The Beginning” which took place in Bahrain on the 23rd of September, 2016. He managed to submit the latter in the opening round after clearly dominating the contest. That same year, Lopez had scored yet another first round finish in his home country Mexico. A professional fighter since 2002, has never been stopped in a fight. He boasts a record of 14 wins and 2 losses, with both setbacks coming by way of decision.

He now takes on Marcel Adur, a 25 year old Brazilian prospect who currently trains under the supervision of the MMA legend Cristiano Marcelo at CM System gym. Fighting out of Curitiba, Adur (11-4) will have the home field advantage but that surely won’t be his biggest weapon. Looking at his record, this young gun loves to finish his opponents at every chance he gets. With 11 wins on his record, Adur has finished 10 fights by either TKO or Submission.

The age difference between him and Ivan could be a double edged sword, as Adur has all the means to finish any opponent. Yet, if it comes down to experience, it is clear who the veteran is. A victory over a vet like Ivan Lopez, who is likely to have the crowd against him, could give Adur the boost needed to crack his way into the Brave roster from the widest door.

Other interesting fights announcements for Brave 3: Battle in Brazil are Luan “Miau” Santiago who was recently elected as “Brazilian Fighter of the Year versus Mexico’s own Ivan “Choko” Castillo. The event will also feature the return of Brazilian prospect Thiago “Monstro” Vieira who will look to bounce back in his home country, after suffering his first professional loss in September, 2016. Thiago is set to face Carlston Harris.

2017 is an action packed year for Brave Combat Federation. Make sure you keep checking our latest news on BraveFights.com. For day to day updates, follow us on Social Media @BraveMMAF.

Government digital transformation efforts are proceeding at breakneck speed, as reflected by the quarterly eServices statistics report, which recorded a 20 fold surge in...
Tech