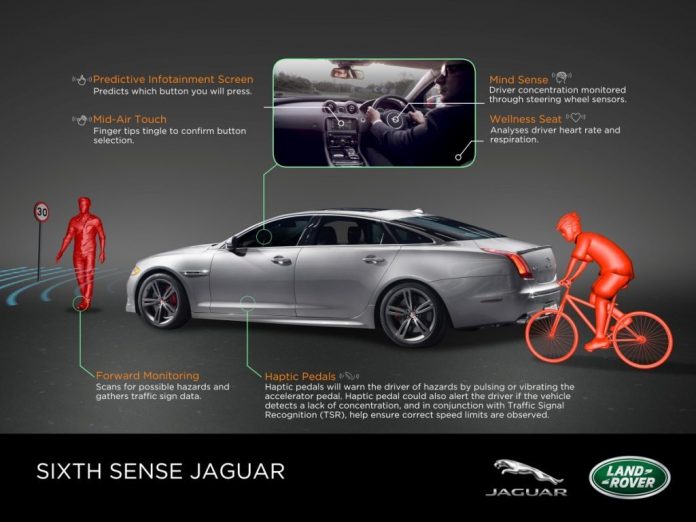 We’ve always wanted that futuristic car which maximizes comfort without taking away the pleasures of driving. While the ultimate intelligent car might not be here yet, with Jaguar Land Rover’s amazing research, you can soon rediscover the joy of driving by relying on the “Sixth Sense” of your vehicle.

Jaguar Land Rover has revealed their pioneering ‘Mind Sense’ project, which measures brain waves to monitor the driver’s concentration in the car. This is part of a range of new road safety technology research projects that are being developed by Jaguar, which aims to reduce the growing number of accidents caused by drivers who are stressed and distracted while driving.

The UK-based team is also researching novel methods that would reduce the amount of time the driver’s eyes are “off” the road whilst driving, and how to communicate with the driver via pulses and vibrations through the accelerator pedal, providing feedback to the driver under dire situations.

Dr. Wolfgang Epple, Jaguar Land Rover Director of Research and Technology, said: “We believe some of the technologies currently being used in aerospace and medicine could help improve road safety and enhance the driving experience. The car is becoming more intelligent and more able to utilise cutting-edge sensors. These research projects are investigating how we could exploit this for the benefit of our customers and other road users.

“One key piece of new research is to see how we could measure brainwaves to monitor if the driver is alert and concentrating on driving. Even if the eyes are on the road, a lack of concentration or a daydream will mean the driver isn’t paying attention to the driving task. They may miss a warning icon or sound, or be less aware of other road users so we are looking at how we could identify this and prevent it causing an accident.”

The basis of Jaguar Land Rover’s Mind Sense research is to determine if a car could effectively read the brainwaves that indicate whether a driver is beginning to daydream, or feeling sleepy, whilst driving.

The human brain continually generates four or more distinct brainwaves at different frequencies. By continuously monitoring which type of brainwave is dominant, using EEG readings, an on-board computer could potentially assess whether a driver is focused, daydreaming, sleepy, or distracted.

“If brain activity indicates a daydream or poor concentration, then the steering wheel or pedals could vibrate to raise the driver’s awareness and re-engage them with driving,” added Dr. Epple. “If Mind Sense does not detect a surge in brain activity following the car displaying a warning icon or sound, then it could display it again, or communicate with the driver in a different way, to ensure the driver is made aware of a potential hazard.”

While the most common method used to detect brainwaves is a network of sensors attached to the scalp, this is impractical while driving as it may distract the driver even further or cause discomfort, which puts a hole in the research process. Jaguar Land Rover is investigating a method already used by NASA to develop a pilot’s concentration skills and also by the US bobsleigh team to enhance concentration and focus.

This method detects brainwaves through the hands via sensors embedded in the steering wheel. The signals are then amplified so as to strengthen the signal and then filtered to eliminate any background noise. Currently, user trials are being conducted to collect more information on the different brainwaves, which is then verified by leading neuro-scientists.

Another important research are is in assessing how a vehicle could monitor the well-being of the driver using a medical-grade sensor embedded in the seat of a Jaguar XJ. The sensor, which was originally developed for use in hospitals, has been adapted for in-car use and detects vibrations from the driver’s heart beat and breathing.

“As we develop more autonomous driving technologies, there will be instances when the autonomous car needs to hand control back to the driver,” added Dr. Epple. “To do this safely the car will need to know if the driver is alert and well enough to take over. So our research team is looking at the potential for a range of driver monitoring technologies to give the car enough information to support this decision. If the car detects severe health issues, or simply how alert the driver is, then the car could take steps to ensure the driver is focussed enough on the driving task to take over.”

Continuously monitoring the physical health of the driver can not only detect the sudden onset of a serious illness that can possible incapacitate the driver, but also allows for the monitoring of the driver’s stress levels. Using these readings, the car could help alleviate the stress by changing the mood lighting, the audio settings or even the temperature within.

Jaguar Land Rover is also working on new technologies that increase the speed and efficiency of the interaction between the driver and the infotainment screen. This aims to minimize the time spent on screen by the driver, thereby reducing the driver’s distraction.

Commenting on the need for a faster interaction module, Dr. Epple said: “The driver will instinctively look at the infotainment screen or dashboard when pressing buttons to select navigation, music or the telephone. It’s intuitive. So our research is looking at how we could take a current infotainment screen and increase the speed and efficiency of this interaction to minimise the time the driver’s eyes are away from the road and their hand is off the steering wheel.”

Jaguar’s Predictive Infotainment Screen prototype uses cameras embedded in the car to track the driver’s hand movements, thus enabling the system to predict which button the driver intends to press. This allows successful button selection to take place mid-air, which means users wouldn’t have to touch the screen itself.  In user trials this increases the speed of successful button selection by 22%, greatly reducing the amount of time the driver spends with their eyes off the road.

Another interesting feature would be a haptic feedback in the form of a ‘tap’ or a ‘tingling’ during button selection. This way, the driver doesn’t have to keep their eyes glued to the screen for conformation that their selection has been made.

Dr. Epple added: “To avoid saturating the driver with more visuals and sounds, which could overload and distract them, we are exploring other ways for the car to communicate with the driver.  With our haptic pedals research we are investigating non-visual ways to communicate which would enable the driver to make smarter and faster decisions and reduce the potential for accidents.”

Rediscover the bliss of hassle-free driving. Don’t just dream it, drive it. Go Beyond.