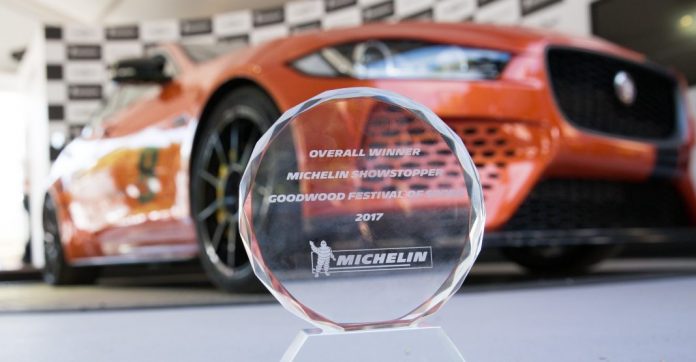 Making its global dynamic debut among the most powerful and extreme performance cars in the world at the Goodwood Festival of Speed, the new Jaguar XE SV Project 8 claimed the hotly-contested Michelin Supercar Paddock Showstopper Trophy – just four days after the car was officially unveiled.

As the only four-door car in the Michelin Supercar Run, the Jaguar faced formidable competition in the 50-car paddock, but voters in an online poll hosted by Michelin UK singled out Project 8 as one of the six most popular cars of the weekend, qualifying it for the overall Showstopper final on Sunday afternoon.

Tim Harvey, Chief Judge, said: “Jaguar’s Project 8 really took everyone by surprise at the Festival this weekend. Not only was it the car’s world debut – but the sheer extremes of the car, and the way it’s pushed the boundaries in every single way, made it an absolute standout in the Michelin Supercar Paddock.

“This shone through in the online vote, and when it came to our judging panel, we were all pretty quickly won over by the Jaguar as a true star of the shortlisted six. It really does it for me as a former touring car racer, and the car’s uncompromising looks and performance secured the rest. Congratulations Jaguar.”

John Edwards, Jaguar Land Rover Special Operations Managing Director, said:
“We are absolutely delighted to receive the Showstopper award for Jaguar XE SV Project 8 on its world dynamic debut at the Goodwood Festival of Speed, and to see the fantastic reaction it’s had from car enthusiasts.

“With spectacular looks, supercar performance, and a soundtrack to match, Project 8 was always intended to turn heads on and off track.”

The second Collector’s Edition by SVO, following the successful F-TYPE Project 7 of 2014, Project 8 is a road-legal hand-built four-door sedan with an extraordinary combination of V8 power, dynamic agility and All-Wheel Drive traction.

To ensure exclusivity, no more than 300 examples of Project 8 will be hand-built at SVO’s Technical Centre in Coventry.

Building on the award-winning lightweight aluminium Jaguar XE compact sedan, Project 8 features a number of purposeful modifications that are fundamental to the performance of the most track-focused car SVO has ever produced, including height-adjustable suspension, the first application of Jaguar’s ultimate new Carbon Ceramic Braking system, and an industry-first use of F1-style silicon nitride ceramic wheel bearings on a road car.

The high-performance theme continues inside, with subtle applications of Gloss Carbon Fibre trim as well as Alcantara, on the rim of the Project 8 Sport Steering Wheel, instrument binnacle and door cards. The eight-speed Quickshift transmission can either be operated by aluminium paddle shifters behind the steering wheel or by a central Pistolshift lever.

Project 8 is available with four seats or an optional two-seat Track Pack. It’s also the first Jaguar to feature a dedicated Track Mode, which tailors driveline and stability control systems for circuit use, and sharpens both throttle and steering responses for ultimate precision and driver feedback.

Full details of Project 8 are now online at www.jaguar.com.

Bahrain and India have agreed to the implementation of the Air bubble arrangement between both countries. Bahrain is one of the countries India has...
Read more
PR This Week