Under the patronage of the Honorary President...
CultureInside BahrainKaaf Humanitarian donates 900 trees, shrubs to NIAD 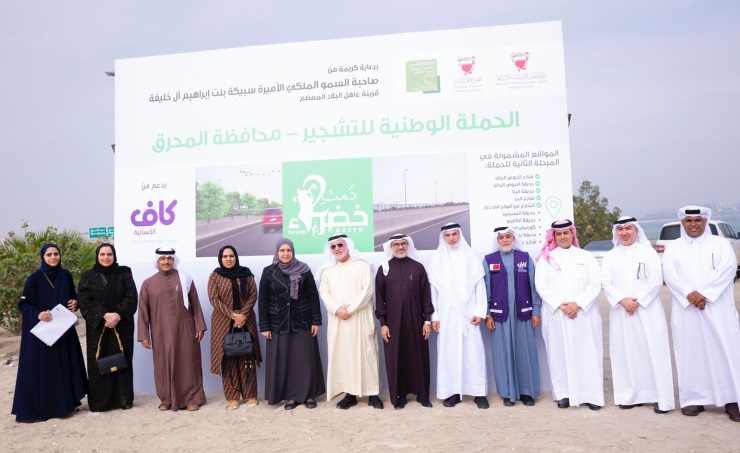 The National Initiative for Agricultural Development (NIAD) has received 900 trees and shrubs from Kaaf Humanitarian, as part of the second phase of the National Afforestation Campaign (Forever  Green).

The trees and shrubs will be planted in three sites, namely Al-Wafa Park in the Southern Governorate, as well as the Busaiteen Park and Amwaj Highway in the Muharraq governorate, which will ensure the afforestation of an area of more than 2150 linear metres, taking into account the environmental nature of each site.

NIAD, in cooperation with the Ministry of Municipalities’ Affairs and Agriculture and the Supreme Council for the Environment, planted 192 trees and shrubs (96 neem, 96 Hibiscus tiliaceus) on an area of 1928 linear metres on Amwaj Highway, leading to Diyar Al Muharraq.

NIAD Secretary-General, Shaikha Maram bint Isa Al Khalifa, Al-Islah Society, President of the Al-Islah Association, and Kaaf Humanitarian’s Chief Executive Officer, Mohammed bin Jassim Sayyar, in addition to other officials from the Muharraq governorate and municipality attended the event aimed at expanding the green space in the kingdom, within the National Afforestation Campaign (“Forever Green) which has contributed to planting more than 50,000 trees and shrubs throughout this year.

The neem and Hibiscus tiliaceus trees were selected because of their great adaptation to the desert nature of the region, as the Kingdom faces a number of climatic and environmental challenges, especially open areas such as Amwaj Highway leading to Diyar Al Muharraq.

These trees act as a natural buffer for sand storms, as well as help to preserve human health, protect the environment, preserve the soil, reduce water pollution, and rationalise electricity consumption.

The donation of Kaaf Humanitarian is the first of its kind by charity organisations and Islamic societies.

NIAD stressed that the door is open for such donations to achieve biodiversity and environmental goals in the kingdom so that Bahrain remains green forever.