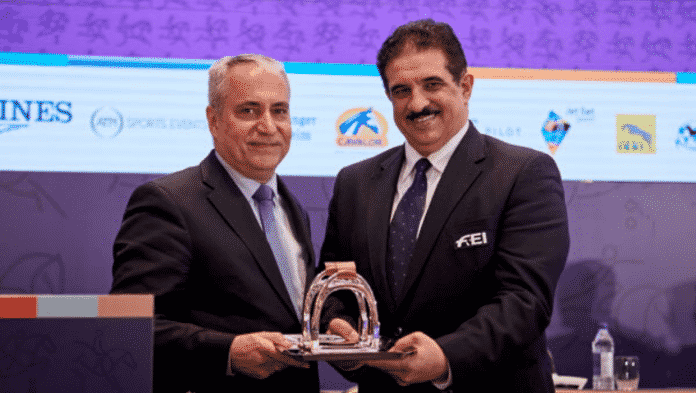 De Vos gifted Shaikh Khalid a souvenir and the honourary vice president badge, becoming the first Arab personality to occupy this position.  From his side, Shaikh Khalid bin Abdullah expressed his happiness for the confidence shown by the federation in him, expressing pride at delivering an important “Achievement for the Kingdom of Bahrain”.

“This accomplishment wouldn’t have been possible without the support of HM King Hamad bin Isa Al Khalifa, the King of the Kingdom of Bahrain, HRH the Prime Minister and HRH the Crown Prince as well as HH Shaikh Nasser bin Hamad Al Khalifa to the horse equestrian and endurance sports,” he pointed out.

As events across the globe have been postponed due to spread of Coronavirus (COVID – 19), BRAVE CF was also proactive in postponing their...
Read more
Sports This Week

BRAVE Combat Federation, the biggest sports property in the history of Bahrain, has launched an awareness campaign to combat the spread of Coronavirus worldwide,...
Read more
Sports This Week

His Highness Shaikh Isa bin Abdullah Al Khalifa, Chairman of the Royal Equestrian and Endurance Federation, expressed his appreciation to the technical and administrative...
Read more
Sports This Week

The National Taskforce for Combating the Coronavirus (COVID-19) held a press conference at the Crown Prince Centre for Training and Medical Research to highlight...
Management Principles

CrediMax, the first and leading Issuing and Acquiring Company in Bahrain, announces the appointment of Mr. Ahmed A. Seyadi as the new Chief Executive...
Sports This Week

The National Bank of Bahrain (NBB) has announced that it is has extended its support to its Commercial and SME customers impacted by the...
Tech

AlMabarrah AlKhalifia Foundation has announced its readiness to implement “Jaser” a first-of-its-kind initiative in the Kingdom of Bahrain, which includes a “Remote Work” platform...
iGA

A total of 1100 meals have been distributed to expatriate workers in the Capital Governorate. The initiative is part of a charity campaign amid precautionary...
© GO ALIVE MEDIA
MORE STORIES