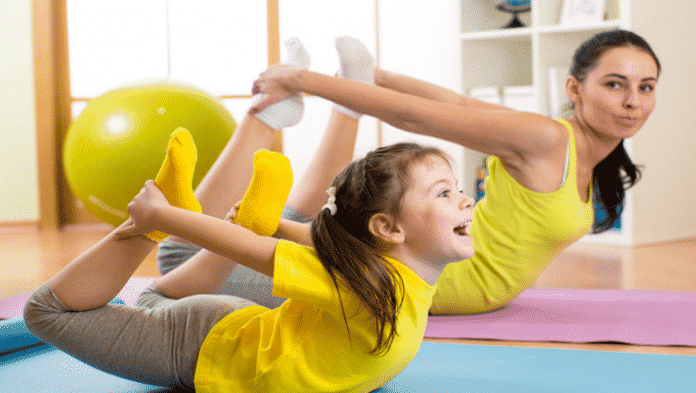 Neelanjana Bhardwaj offers an interesting take on kids yoga and the right age to start.

Unlike other physical disciplines, yoga is a holistic science which works from inside out. Since it works on the physical, mental, spiritual and psychological development of any person one would think that the earlier one initiates into a yogic practice the more beneficial it would be.

But usually kids too young do not follow instructions, and getting them to sit still is a task in itself. Some  believe that the magical age to teach kids yoga is when they become eight and there is a reason for this belief.

According to medical science, eight is actually an important milestone for children because the number of air sacs in the lungs stabilize at age eight; after that, they merely grow in size but not in number. This is why after age eight, pranayama is introduced.  Plus, many yoga experts do state that practicing yoga early on delays the onset of puberty by a couple of years so, in a way, yoga is great for letting children be children that bit longer.

Having established 8 as the right age for formal yoga training children can be introduced to asanas in a fun educative way, as soon as they are in pre school.
So, obviously to keep them engaged one has to make the practices sessions dynamic and fun yet imparting knowledge so they can absorb better.

Weaving stories around the animal and plants inspired postures is a greater way to keep their attention yet involve the kids in the practice.

As mentioned earlier, the breathing techniques in kids yoga can be taught once they are at least 7-8 years old so they are more attentive plus receptive. But the basics of yogic breaching can easily be taught to  the kids in a creative, engaging manner by giving examples like ‘fill up like a balloon’s etc.

So, yoga is a great way of bringing calmness, strength and clarity of mind for children and can be easily introduced to them early on, keeping the above basics in mind.

Out of the six ‘rasas’ or tastes as defined in Ayurveda, the Indian science of healing, ‘Katu,’ rasa is pungent taste or very spicy...
Read more
Yoga

The ancient texts of Ayurveda consider salt among the six important tastes or rasas known as ‘Lavana’. The addition of salt to any recipe...
Read more
Yoga

When we talk about food in Ayurveda, the emphasis is more on quality and taste. There is no specific ‘ayurvedic  food’ as such but...
Read more
Yoga

‘You are what you eat.’ Ever heard this before? As per the ancient Indian Vedic science of life, Ayurveda, the food that we eat...
Read more
Yoga

‘I have a sweet tooth’, ‘I love spicy food’, ‘Tangy flavors are my thing’, and many such personal tastes in food define people’s palette....
Read more
Yoga

Ayurveda is an ancient sister science of Yoga, originating from India. It’s a form of holistic medicine focused on promoting a balance between your...
Read more

Southern Governor His Highness Shaikh Khalifa bin Ali bin Khalifa Al Khalifa met  through his virtual Majlis with a number of citizens from the...
Read more
Inside Bahrain