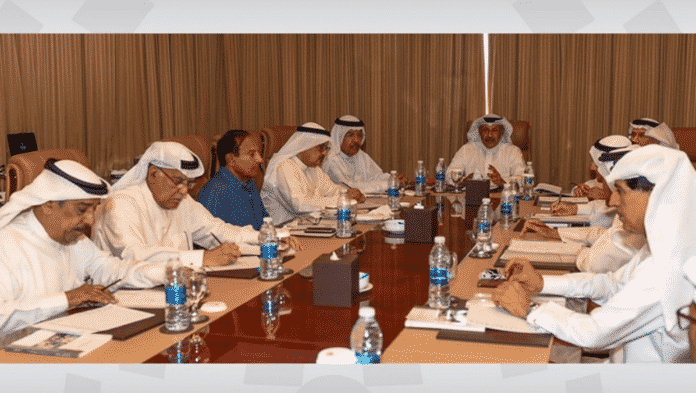 Advisor to HM the King for Youth and Sports Affairs, Saleh bin Isa bin Hindi Al-Mannai, chaired a meeting of the Bahrain Sports Pioneers Society, in the presence of founders.

Bin Hindi conveyed greetings from His Majesty King Hamad bin Isa Al Khalifa to the attendees, as well as his wishes of success for the Bahrain Sports Pioneers Society in boosting the youth and sports movement in the Kingdom.

He lauded the interest of HM the King’s Representive for Charity Work and Youth Affairs and Chairman of the Supreme Council for Youth and Sports, HH Shaikh Nasser bin Hamad Al Khalifa, in supporting the Bahrain Sports Pioneers Society, paying tribute to the Labour and Social Development Minister, Jameel bin Mohammed Ali Humaidan, and the Minister of Youth and Sports Affairs, Ayman bin Tawfiq Al-Moayyad, for facilitating procedures to establish the Society.

The founders also selected Saleh Bin Isa Bin Hind Al-Mannai as the board chairman of the Bahrain Sports Pioneers Society.

HM the King’s Advisor valued highly the founders’ confidence in him, pledging to do his utmost in order to achieve the Society’s goals.

During the same meeting the Board of Directors of the Bahrain Sports Pioneers Society was formed, an advisor for the society was appointed and sub-committees were elected.

The attendees stressed the need to send cables of thanks and appreciation to HM King Hamad, HH Shaikh Nasser, Shaikh Isa bin Rashid, the Labour Minister and Youth Minister for their support.

The Asian Football Confederation (AFC) has announced Bahrain as hosts of the 2020 AFC Cup West Zone matches in Groups A. AFC has also confirmed...
Read more
Sports This Week

Malabar Gold & Diamonds, one of the largest global jewellery retailer has opened two new showrooms in India as part of its global expansion...
Read more
Inside Bahrain

The Kingdom, represented by the Bahrain Defence Force (BDF), received the patrol warship, "RBNS Al-Zubara", from the British BAE Systems Company. The handover ceremony was...
iGA

The Supreme Council for Women (SCW) and the Ministry of Industry, Commerce and Tourism (MOICT) have announced their new collaboration through "Export Bahrain" in...
Entrepreneurial Journey

When my father retired from business, he handed over the responsibility of Al Adil Trading Co. and its retail shops across the UAE to...
© GO ALIVE MEDIA
MORE STORIES