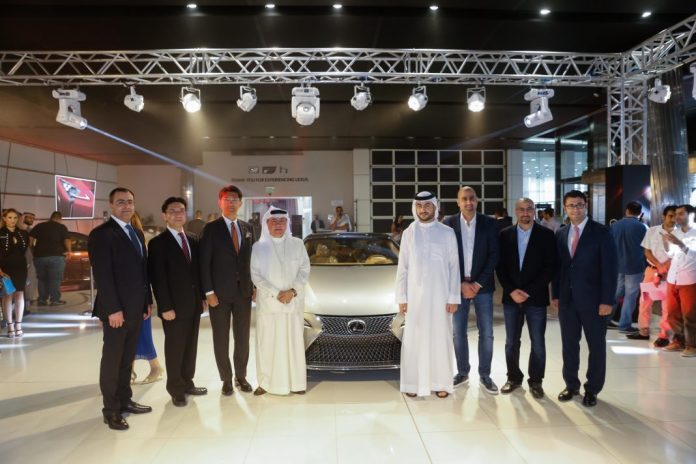 Ebrahim K. Kanoo, sole distributor of Lexus vehicles in the Kingdom of Bahrain, announced that the Lexus LC 500 and LC 500h models are now available in the showroom.

The new Lexus LC is a powerful, emotionally stirring realisation of the vision of Lexus master driver Akio Toyoda for a flagship production coupe that echoes the spirit of the hand-built Lexus LFA supercar and delivers the visual impact of the Lexus LF-LC concept.

Koji Sato, Chief Engineer of the Lexus LC, said: “While maximising the fundamental taste of the LF-LC, we applied completely different specifications to create a design that goes beyond the concept – a design that will captivate you as soon as you see it. In my view, pursuing beautiful design and elaborating superior performance are two very similar aspects. Beauty is the identity of Lexus’ design. Every feature of the LC is the result of an integrated approach to design and engineering.”

“The all-new Lexus LC is a flagship coupe which represents the evolution of Lexus as a lifestyle brand that will surprise and delight customers. The car symbolises the beginning of a new phase for Lexus, which is all about creating greater synergy between engineering and design,” said Takayuki Yoshitsugu, Chief Representative of Middle East and North Africa Representative Office, Toyota Motor Corporation. “The LC makes the strongest statement yet about the brand’s future direction, and is the result of painstaking craftsmanship, attention to detail and an advanced, future-oriented approach to engineering.”

Immediately identifiable as a Lexus thanks to its hallmark spindle grille and dynamic character lines, the 2018 LC represents the most passionate expression of the brand’s design direction. The grille itself features a unique mesh texture that changes visual tension as it spreads across the front of the car. Independent L-shaped daytime running lights beneath new ultra-compact triple LED headlamps create the distinctive LC front lighting signature. The combination of a large glass panel and blacked-out rear pillars creates a floating roof appearance, and chrome-plated moldings along the edges, which echo the lines of a traditional Japanese sword, amplify the effect.

Powered by a high-performance V8 engine, the all-new Lexus LC 500 exhales through the variable Active Exhaust upon startup, with the 5-litre naturally aspirated V8 issuing a clarion call to driving enthusiasts. The LC 500 can sprint from zero to 100 km in less than 4.7 seconds. It’s a well-proven performance engine, with a low-mass reciprocating assembly using lightweight forged connecting rods, along with titanium intake and exhaust valves to allow a 7,300-rpm redline. The D-4S injection system uses direct fuel injection that allows a high compression ratio augmented by port fuel injectors to enhance low-speed response. Under acceleration, the LC 500 reveals its character in a continuously rising power curve, with the 471 HP developed at 7,100 rpm and the torque peak of 55.0 kg-m at 4,800 rpm.

The Lexus LC debuts the first 10-speed automatic transmission for a luxury automobile. Smaller and lighter than some 8-speed units, this new transmission executes shifts at speeds rivaling dual-clutch transmissions, yet with the seamless performance and smoothness of a torque converter automatic. The LC allows manual shifting via magnesium paddles.

The dynamic luxury theme of the exterior is carried through into the LC’s cabin, which brings together elegance, quality and sophistication with a driver-focused cockpit. The ideal grand touring coupe cabin must strike a balance between function and comfort, sporting intent and luxury. The Lexus LC hits that note with an intuitive layout and an optimal seating position that set the stage for spirited driving. The design places the driver’s hip point as close as possible to the car’s center of gravity, where feedback from the car is the most communicative to the driver.

The Lexus LC comes in four distinctive interior color schemes that include new Breezy Blue and Ochre, together with Dark Rose and Black seen in other Lexus models. The quality and finish of the upholstery, trim materials and detailing reflect the Takumi craftsmanship and fine attention to detail for which Lexus is renowned. It can be seen and felt in the hand stitching of the leather-wrapped gearshift lever and the draping treatment of the Alcantara door panel trim, among numerous other details.

Lexus, which introduced the world’s first luxury hybrid 13 years ago, developed a new Multi Stage Hybrid System specifically for the LC 500h. The Multi Stage Hybrid System is a world’s first construction that combines the Lexus hybrid system with variable gears. By controlling the output of both the higher rpm 3.5-litre V6 engine and the electric motor, it achieves powerful performance from low speeds through to high range driving.

The LC uses an advanced Driver’s Mind Index (DMI) control to understand the driver’s intentions which helps to optimize gear selection. The power generated from the engine and the motor is rapidly and accurately sent to the tires, providing for a high-performance engine rpm and acceleration in accordance with the driver’s intentions. When driving along winding roads, the car changes to a lower gear, and proceeds to actively downshift when braking. On the other hand, during more challenging sports driving, the battery provides additional output so as to achieve a greater torque sensation, thus providing an emotional driving experience that will change the way hybrids have been perceived.

Both versions of the LC are equipped as standard with Lexus Safety System+, an array of active safety features that can help the driver avoid an accident, or help lessen the consequences of a collision. The system uses a camera and millimeter-wave radar to monitor the road ahead for potential hazards and collision risks.

Nvidia is promising big things with the GeForce RTX 3080 graphics card. “Twice the performance” of the RTX 2080 is perhaps the biggest claim...
Read more
Wheels and Gears

Y.K. Almoayyed & Sons, the sole distributor of Renault vehicles in the Kingdom of Bahrain hosted a special delivery ceremony in Bahrain to hand...
Read more
Tech

Vivo is developing one of the coolest looking phones I’ve ever seen. In a video posted to Weibo (and spotted by Android Authority), the...
Read more
Wheels and Gears

Motorcity, the distributor of world-renowned vehicles in Bahrain, has announced the addition of French automaker, PEUGEOT to its line-up of automotive brands. All existing...
Read more
Tech

Apple CarPlay and Google’s Android Auto both seem pretty useful for drivers — simply plug in your phone to charge, and it’ll link up...
Read more

stc Bahrain, a world-class digital enabler, is the first telecom operator in Bahrain to venture into Roadside Assistance and Home Assistance services, expanding its...
Read more
Sports This Week