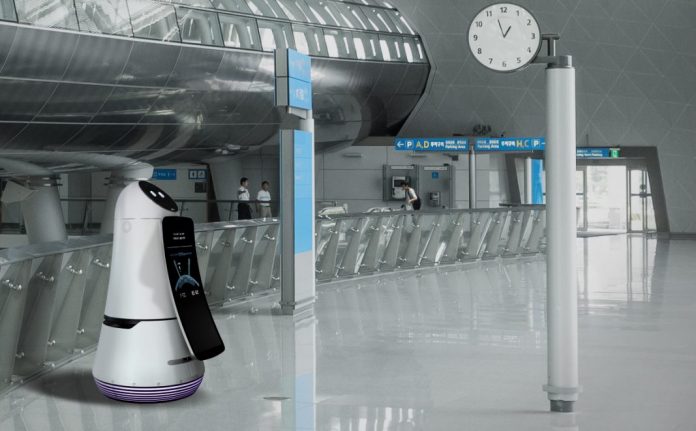 With GCC cities aiming to become smarter and more connected,and with airports expecting to become friendlier and less stressful for travelers, artificial intelligence and robotic personal assistants appear to be seamlessly entering public spaces and even the home, marking 2017 as the year consumers have begun embracing a future founded on smart technology.

LG has been at the forefront of developing robotic technologies that incorporate deep learning for the smart city and home, ensuring usability is at its best and that the consumer continues to be connected.

“Once viewed merely as machines capable of performing automated work, robots were typically used to complete tasks that required incredible precision or were too dangerous for humans to do themselves,” said Yong Geun Choi, President, LG Electronics Gulf. “But that has all changed in recent years with advances leading to the development of intelligent machines that can think, a feat that was once only possible in the world of film and television.”

Robots and the futuristic home

Smart home advocates have praised the potential of this technology for years, but widespread adoption has lagged even the most pessimistic projections. So what has prevented IoT-powered smart homes from taking off? One the key obstacles to integration has been the challenges posed by incompatible networks and smart ecosystems. Though smart appliances are designed to make life easier for users, the reality is that competing systems actually multiply complexity and prevent the general public from seeing the appeal of smart homes.

LG’s Hub Robot addresses these concerns by tying the entire smart home together under a single-user friendly interface. Amazon Alexa’s voice recognition technology easily allows the robot to connect to other smart LG home appliances, uniting them into a single streamlined ecosystem.

In addition, the Hub Robot keeps the family in sync by keeping track of all the activities occurring inside the home while simultaneously personalizing itself to each individual member of the household. By making the benefits of connected IoT technology more accessible than ever before, the Hub Robot is positioned to become the true centerpiece of the next generation of smart homes.

While humanoid robotic butlers are still beyond our capabilities, exciting strides are being made in applying the power of robotics to meet daily household needs. Bringing the benefits of smart home technology to users with intuitive voice operation, the Hub Robot is able to fulfill the imagined role of robotic assistant despite its unorthodox shape and lack of mobility. Because the LG Hub Robot is stationary, it is compatible with the Hub Robot Mini.

These smaller robots interact with the primary Hub Robot to expand the power of IoT to the entire house. In addition to instinctive voice control and seamless ecosystem integration, the Hub Robot utilizes advanced facial recognition software to provide a customized experience to each user. Responding to individual settings can provoke a variety a reactions from Hub Robot, and it is even capable of providing basic childcare.

Robots and the future airport

For most travelers, flying is extremely stressful. This is in no small part due to the hectic nature of airports. The world’s larger airports are incredibly complex and are constantly bustling with thousands of people traveling from one destination to another, scrambling to find their luggage, and waiting in never-ending lines. Considering security and other hassles, most travelers arrive two hours early for domestic flights and three hours before an international flights.

LG’s Airport Guide Robot applies advanced technology to the problem of air travel to eliminate stress with its friendly design and convenient features. The robot steps right into the role of a human airport worker, albeit one that never tires and never loses its amiable demeanor.

The Airport Guide Robot is able to scan ticket barcodes to provide flight and gate information, as well as the time and weather of the traveler’s destination. The robot can also speak four different languages (English, Korean, Chinese and Japanese) and is equipped with potent voice recognition technology. LG’s Airport Guide Robot reduces the hassle of flying by providing travelers with all the information they need to get to their destination.

“With the amount of anticipation surrounding robots, users are already familiar with several of the benefits robots bring. In fact, smartphones and IoT have long employed voice control, making them excellent examples that demonstrate what benefits new robots really offer. As LG introduces its latest robotic technology including the Hub Robot and others, and as the smart cities we live in continue to strive for connectedness, there is no doubt that this year marks a shift in how users accept, live with and experience robots in the home and beyond.”

A number of business owners have extended their appreciation to Batelco for the financial support towards their fixed internet cost for 3 months in...
Read more
Inside Arabia

Representative of His Majesty the King for Humanitarian Work and Youth Affairs His Highness Shaikh Nasser bin Hamad Al Khalifa received Board Chairperson of...
Tech