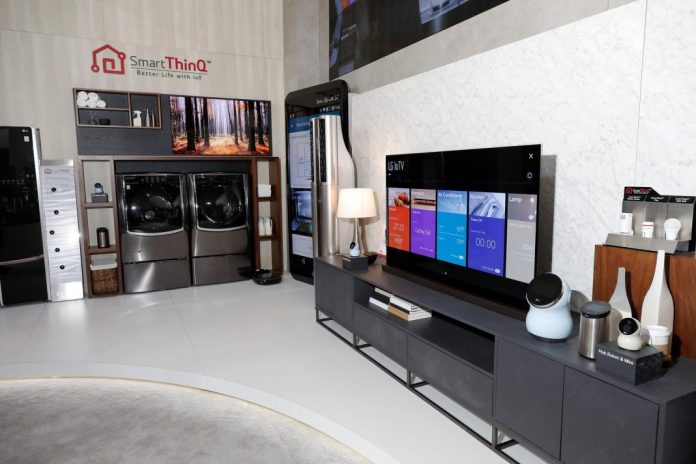 LG shapes the year ahead with trendsetting smart technology

The year 2016 was another eventful year for the consumer electronics industry with a number of exciting and sophisticated technologies advancing to fulfil their potential on the world stage. The year 2017 appears to see the continuation of these trends, as the products, which shape the world around us are improved to better suit evolving user trends and market demographics.

In the first week of 2017, the biggest technology brands along with literally thousands of technology enthusiasts and consumers congregated in Las Vegas for the Consumer Electronics Show (CES), attracting the world’s most prominent business leaders and pioneering thinkers to a forum where the industry’s key issues are addressed. After sifting through the deluge of information presented at CES, some of the 2017 technology trends in which LG is bound to make a trendsetting impact include the Smart home and IoT, wearables with smart usability, Augmented Reality, smart cars, 4K and beyond.

“In 2017, the sophisticated LG product line-up plays an active and trendsetting role in its ability to innovate across multiple sectors. The company renews its commitment as an industry leader across many of the year’s top trends to continue producing an effective IoT ecosystem by bringing together its premium products and appliances with its outstanding smart technology and innovative designs,” said Mr. Yong Geun Choi, President, LG Electronics Gulf.

Getting Smart: The Future of IoT at Home and Beyond

Overall hype for IoT has been a consistent theme for the past five years and is expected to persist, with the technology moving beyond connected homes into 3D printers, robotics, wearables, drones and cars. IoT is now expanding its reach to both consumer and commercial applications. In order to succeed in the coming year, device manufacturers and service providers must establish IoT’s ability to transcend its underlying technologies and gadgets and deliver tangible consumer experiences and concrete results.

Leading manufacturers have finally begun to deliver on the long-offered promise of the Smart Home through solutions optimized for the kitchen, lighting, security and climate control. Despite the past success of these solutions, the uniting of disparate ecosystems to from a coherent bigger picture is yet to occur.

LG looks to expand the reach of its SmartThinQ Hub, now compatible with Amazon’s intelligent personal assistant Alexa as well as the SmartThinQ sensor technology. LG’s innovative appliances such as the Smart InstaView refrigerator and the SmartThinQ washing machine also make an impact in the industry with regards to IoT.

Taking the power of IoT and smart technology to another level, LG introduced its Hub Robot, which doubles as a smart home gateway and intelligent home notification center. Equipped with an interactive display, the Hub Robotcan showcase a great deal of information such as images of contents inside of the refrigerator and recipes, complete with step-by-step audio instructions. Additionally, Hub Robot can interact with the entire family in a variety of different ways. It aslo  expresses a wide range of emotions by displaying a face on its display.

Wearables of all shapes and sizes will be on the market in 2017, ranging from watches to glasses to ear-pieces (‘hearables’) to clothing and jewellery. Even though consumer awareness is high, manufacturers are still struggling to find the right pricing model and features needed to help the technology truly take off. Because the technology has been in the public eye for such a sustained period without widespread adoption, consumer abandonment is a growing concern and will be one of the chief challenges in 2017.

LG has been an innovator across multiple segments of the wearable space, with its series of smartwatches and TONE INFINIUM, helping set the bar in their respective markets. Combining smart usability with interactive, user-friendly features, LG wearables have helped consumers become familiar with the most exciting technology on the planet. TONE INFINIUM Bluetooth headsets have won a loyal following by offering unparalleled quality alongside user convenience.

Augmented reality and virtual reality are among the fastest growing sectors of the tech industry, with analysts predicting revenues as high as USD 120 billion by 2020 for AR and USD 33.9 billion by 2022 for VR. In 2016, AR technology was thrust to the forefront of the public consciousness on the back of the popular game Pokémon Go.

But augmented reality has been around for decades. For instance, the digitized yellow first down markers that appear in televised American football games have been around since the 1990s.

LG’s most prominent product with AR features is its robot vacuum cleaner, the HOM-BOT Turbo+, which has a function that grants users the ability to use their smartphone camera to tell the robot where to clean. LG and other manufacturers will continue innovating in this vibrant sector in order to find applications for this emerging technology as usage trends evolve. AR is poised to dominate the headlines in 2017, and will be a key household technology within the next several years.

In 2017, we can expect more connected cars on the road, with experts predicting that 60 percent of new cars sold during the year to include IoT features. LG is making inroads into the automotive industry to capitalize on its IoT expertise to find new areas of growth. In 2016, the company announced a partnership with Volkswagen to develop a connected car platform. The collaboration will lead to the development of technologies that allow drivers to control and monitor smart devices in the home from their cars and give notifications about real-time driving situations that will promote safer driving.

The next generation of TVs poised to enter the market in 2017 promise to provide the most brilliant range of colours and the clearest displays yet created. Industry mainstays will be anxious to draw attention to the advances made in color technologies in 4K, 8K and OLED displays to build enthusiasm for the next wave of TVs. Potential breakout candidates include 4K UHD, glasses-free 3D TVs, curved screens and integrated smart video streaming services.

“With all of the excitement and enthusiasm surrounding 2017 – especially after CES – it is easy to get caught up in the moment and hype radical new technologies, but with LG, that is not the case. As an established player in the market, LG continuously garners mass appeal by carefully crafting its best line-ups using the most trendsetting and innovative smart technologies that not only leverage trends, but continue to push them forward,” concluded Choi.

On behalf of His Majesty King Hamad bin Isa Al Khalifa, HM the King’s Personal Representative and President of the Supreme Council for Environment...
Inside Arabia