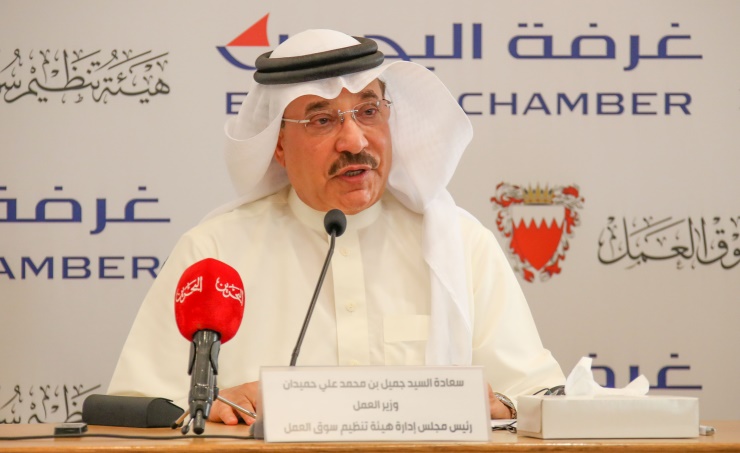 The Labour Market Regulatory Authority (LMRA) held a joint press conference with the Bahrain Chamber of Commerce and Industry (BCCI), on the Expatriate Worker Registration Programme, at the Isa Cultural Centre.

The Minister of Labour and Chairman of LMRA Board of Directors, HE Jameel bin Mohammed Ali Humaidan, highlighted that the Royal Directives of His Majesty King Hamad bin Isa Al Khalifa, with the support of His Royal Highness Prince Salman bin Hamad Al Khalifa, the Crown Prince and Prime Minister, confirm the Kingdom’s commitment to providing a safe environment for workers, protecting their rights and contributing to Bahrain’s economic development goals.

Humaidan noted His Royal Highness’ directives to replace the Flexi Permit, which includes registering all expatriate workers in partnership with the private sector, increasing inspections to identify workers and employers engaging in illegal activity, and linking work permits to vocational and occupational standards.

The Minister affirmed that these measures will enhance the role of the private sector as a major driver of development, revitalizing real estate projects and providing the manpower required for the development of all economic sectors, to create opportunities for citizens.

Humaidan highlighted that the Government continues to take measures that provide stability and growth in the labour market, with a number of initiatives designed to connect those seeking employment with private sector employers and opportunities, whilst intensifying efforts to address negative influences, including irregular employment.

He noted that the Kingdom of Bahrain continues to support the provision of safe, secure and productive working environments in compliance with global labour standards, reflecting Bahrain’s international recognition for employment rights protection.

For her part, the Chief Executive Officer of the LMRA, Nouf Abdulrahman Jamsheer, explained the process for registering expatriate workers in partnership with the private sector, noting the importance of partnership between the public and private sectors in developing stable work environments that guarantee the rights of all parties and are free of discrimination.

In relation to the importance of community cooperation and support for government efforts to eradicate illegal practices, Jamsheer noted that, in cooperation with the Ministry of Interior, the frequency of inspections has been increased, and urged the public to report labour market violations, stressing on the important role of the community in cooperating with official bodies to address these issues.

Inspections are being increased to address a range of illegal practices, including the sale of work permits and working without a permit, in addition to combating all forms of trafficking in persons and forced labour.

Jamsheer noted that the first stage will be the activation of the new labour registration centres, in coordination with the Ministry of Industry and Commerce and the private sector, and highlighted that an online registration section in the “Sijilat” portal will facilitate worker registration.

Jamsheer affirmed that this system will contribute to addressing irregular employment by registering all expatriate workers with the registration centres, indicating that the wage protection system will be operational to guarantee the rights of workers and employers through continuous monitoring.

Jamsheer also noted that this database system will help meet labour market’s needs for technical workers in professional jobs, as working in specialized professions will only be permitted following the verification of qualifications, adding that a work permit card will be issued for each worker with a QR code that includes up to date data.

The QR code will include the type of permit, the worker’s authorised professions, the validity of the permit, health insurance details, and the name of the facility or centre with which they are registered.

The CEO added that workers can only register if they reside in the Kingdom of Bahrain, have not absconded from their jobs and have a clear criminal record. Applications will not be accepted from those entering the country on a visit visa, and registered workers are not allowed to obtain a commercial record.

Workers will have to pay fees for issuing and renewing a permit, for health insurance and insurance for departure expenses, in addition to the monthly fees and registration fees.

For his part, the Chairman of the BCCI  Sameer Abdulla Nass, affirmed the BCCI’s commitment to work with relevant government entities towards achieving HM the King’s vision of Bahrain’s comprehensive economic development, with the support of His Royal Highness, the Crown Prince and Prime Minister.

Nass expressed his sincere thanks and appreciation to His Royal Highness, the Crown Prince, the Prime Minister, for his registration directives, due to the positive effect they will have on all national commercial, industrial and craft sectors.

He further noted that HRH’s directives always incentivise economic development at all levels, and in all commercial, investment and industrial sectors, supporting and developing the Kingdom’s economy.

He Nass affirmed that the BCCI supports all activity to promote economic growth in the Kingdom, and achieve a sustainable economic future, in which the private sector is a key partner in Bahrain’s economic development.