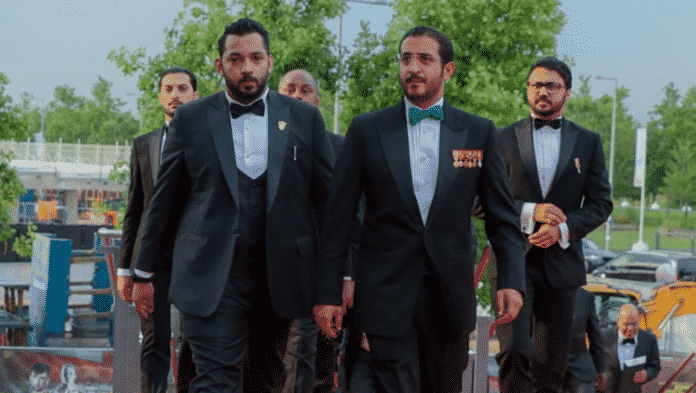 HH Shaikh Khalid was accompanied by HH Shaikh Khalifa bin Ali Al Khalifa, Vice President of Riffa Sports and Cultural Club as well as HH Shaikh Isa bin Rashid Al Khalifa and other distinguished invited guests, amongst whom there were politicians, celebrities and MMA enthusiasts. On this occasion, HH Shaikh Khalid expressed his utmost pleasure at having BRAVE 24 organised in UK’s capital London, whose authorities have given the event special attention, making the the championship a huge success.

“On the outset, I would like to praise the Bahraini-UK’s historic ties which dates back to more than 200 years ago. Those links have been strengthening thanks to the efforts of both countries and their desire to improve them and develope them across various fields, especially sports,” HH Shaikh Khalid pointed out.

He further added: “Bahrain and UK have witnessed clear development in the MMA sport. Organising BRAVE in London has boosted our efforts to spread the event around the world thanks to London’s strategic international position as it’s considered one of the important MMA hubs.”

Moreover, HH Shaikh Khalid praised the performances of the fighters who participated in the event as well as its organisational level and the media coverage of it, singling out Brave Organisation, headed by Mr Mohammed Shahid for praise owing to the preparation for the event.

The Saudi Arabian Federation for Electronic and Intellectual Sports (SAFEIS) is set to organize "Gamers without Borders" tournament which brings together an elite of...
Read more
Sports This Week

Motorcity, the exclusive distributor of Maxus vehicles in Bahrain has delivered a fleet of five Maxus V80 vehicles to Babasons, a leading supermarket chain...
Spotlight

Gulf Air, the national carrier of the Kingdom of Bahrain, confirms the return of operations out of the Islamic Republic of Pakistan starting from...
© GO ALIVE MEDIA
MORE STORIES