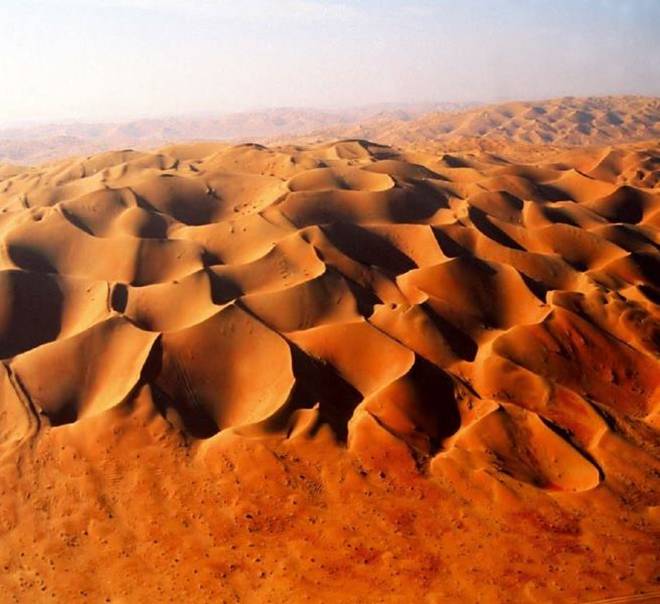 Extending across four different nations in the Arabian Peninsula, the world’s largest sand desert is defined by rich Bedouin tradition and its unimaginable geography. Rub’ Al Khali, literally meaning ‘quarter of emptiness’ spills across parts of Saudi Arabia, Oman, the UAE and Yemen. Covering over 650,000 kilometers, this Empty Quarter is probably one of the least inhabitable places on earth because of its hard, and unyielding conditions that makes it inhospitable to life. Covered with sand dunes and gravel and gypsum plains, several parts of the desert exude a reddish-orange colour due to the presence of feldspar in its sand.

Going towards the middle length of the desert, several evidences have been found proving the existence of lakes that might have been formed due to cataclysmic rains. There are several other animal fossil remains resembling species like the hippopotamus, long horned cattle and water buffalo also found from the site. But so far no human fossils have been found to hint on human inhabitation of the area.

Geologically one of the most oil rich sites in the world, the Empty Quarter holds vast oil reserves underneath its sand dunes. Sheyba, the light crude oil producing site in Saudi Arabia and Ghawar, the largest oil field in the world are part of this vast desert region.

Even though the Empty Quarter is classified as a hyper-arid region, it has since long been a celebrated place in several works of fiction from across the globe. H.P. Lovecraft’s Call of Cthulhu, Nelson DeMille’s The Panther, and Gerald Seymour’s Unknown Soldier are a few where the Rub’ Al Khali has found mention or been the place of action.

Video game lovers may remember the PlayStation 3 Videogame, Uncharted 3: Drake’s Deception, where the Empty Quarter is one of the settings for the protagonist Nathan Drake to search for the Iram of Pillars.

Nvidia is promising big things with the GeForce RTX 3080 graphics card. “Twice the performance” of the RTX 2080 is perhaps the biggest claim...
Wheels and Gears