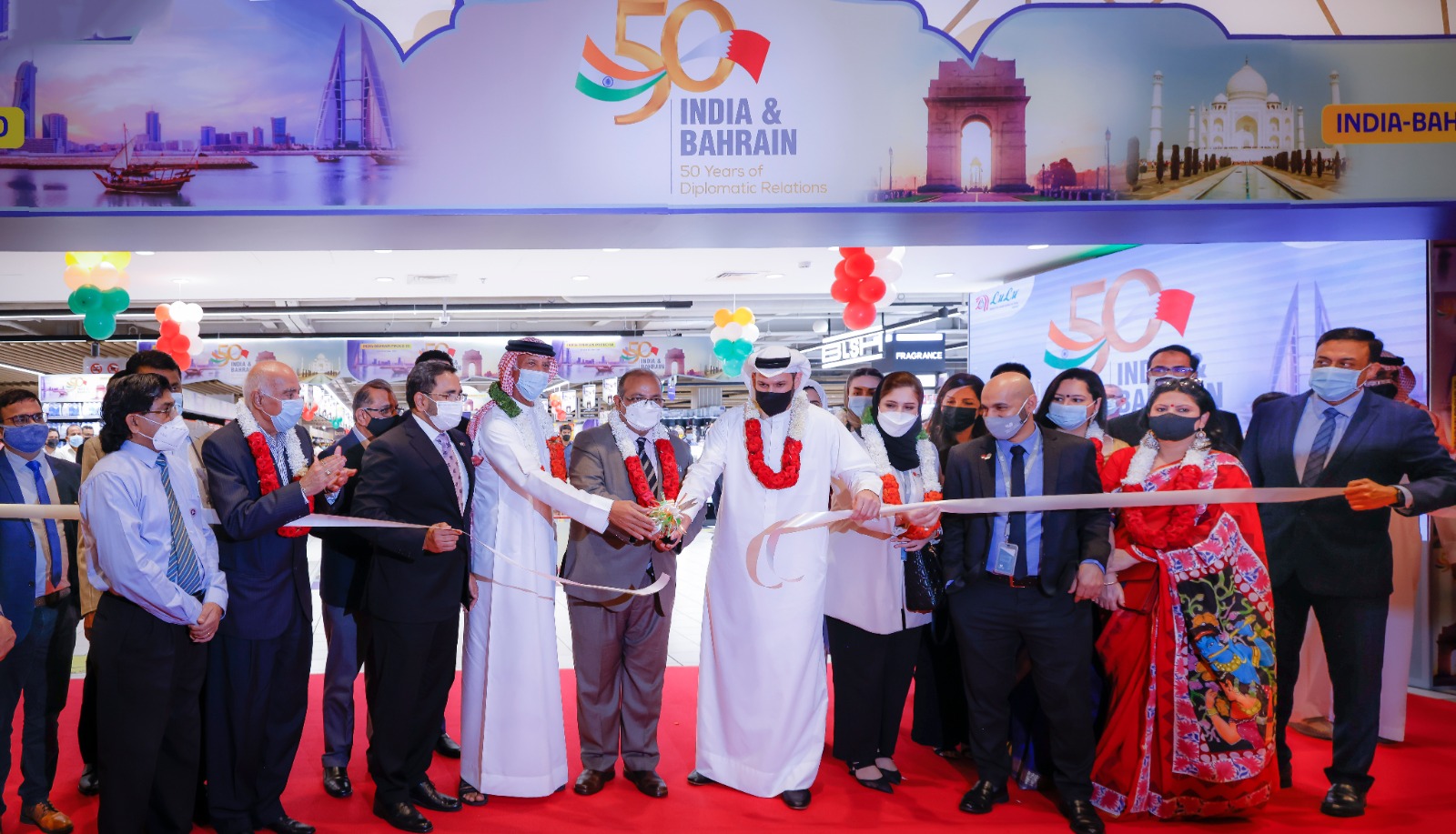 With colour and a focus on Indian and Bahraini products in its aisles, Lulu Hypermarket, one of the largest retail businesses in the region with roots in India, launched the 50th anniversary of contemporary Bahraini-Indian relations with grand celebrations on Oct 13, 2021.

The festival was inaugurated at Dana Mall by Indian Ambassador to Bahrain, H.E. Piyush Srivastava in the presence of H.E. Nibras Mohammed Talib, the Assistant Undersecretary of Commercial Registration & Companies at the Ministry of Industry, Commerce & Tourism. Mr. Juzer Rupawala,Lulu Director of the Lulu Group and senior management of the Lulu Hypermarket welcomed the guests who included Ms. Safa Sharif Al Khaliq, Acting CEO of Export Bahrain, leading businessmen, VIPs and officials of Indian and Bahraini clubs.

During the tour of the hypermarket, guests were treated to a flash mob dance performance by Lulu staff which was set to Bahraini and Indian tunes. There was also a Bahraini folk music band performing.

Indian Ambassador H.E. Piyush Srivastava said,  “Lulu Group in Bahrain in the region is an example of strong trade ties between our two countries.  They have always been very active in celebrating and taking part in the events promoting the shared heritage of our two countries. I thank Lulu group for being part of these celebrations. I wish the event all success.”

Speaking on the occasion, “the Assistant Undersecretary Mr. Talib said that India and Bahrain enjoy a robust  bilateral trade and commerce relationship as well as centuries of strong socio-economic and cultural ties, making India an important trading partner and ally.Ms. Al Khaliq of Export Bahrain also praised the Lulu support of Bahrain enterprise.

“Export Bahrain is proud of the successful working partnership that we have developed with The Lulu Group,” said Ms. Safa Al Khaliq, “Through Lulu’s global network, we have put our ‘Made in Bahrain’ products on the world’s retail shelves and raised the bar for our local industries. Clearly this is a huge example of Indo-Bahraini commercial cooperation.”

Mr. Rupawala said that the Lulu Group was proud of its association with India, homeland to over half its 57,000 employees globally.

“As one of the premier business houses in the region and with the fastest-growing retail division, we are proud of our association with India,” said Lulu Group Director, Mr. Juzer Rupawala, “Our Chairman and Managing Director, Mr. Yusuffali M.A. always says that the Lulu Group is privileged to serve as a bridge between India, the country of his origin and that of over half of our 57,000 employees around the world  and the GCC.”

He added, “Since 2007, when Lulu entered the Bahrain market to the eight hypermarkets that we have today in the Kingdom,  Lulu is an important partner in the Kingdom’s success and progress. We work closely with Export Bahrain, for example, to build a platform for goods made in Bahrain to reach our 215 hypermarket aisles around the world; we work with the Directorate of Agriculture to create marketing space for Bahraini farmers’ produce and the products of the Productive Families’ Unit in our hypermarkets.   We are delighted to showcase Lulu’s connect with the Bahraini and Indian community and also the many channels of commercial support that we offer Bahraini companies and Indian suppliers.” The celebration includes up to 50% off as promotional discounts on a wide range of Indian and Bahraini goods and offers will run till October 16.