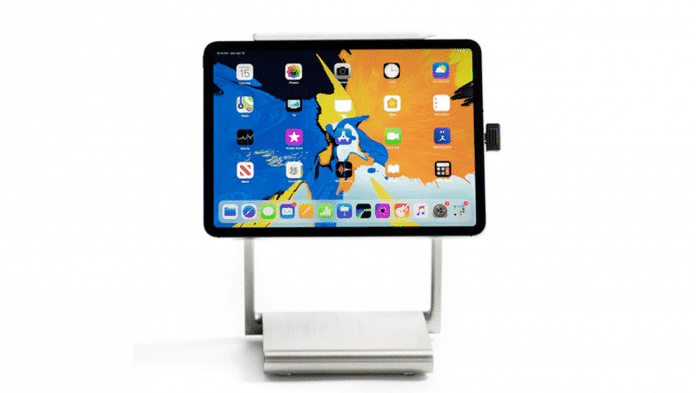 MagicDock is a Surface-like dock for the iPad Pro

Apple has been gradually improving its iPad Pro with monitor support, USB-C, and even the ability to use a mouse with the tablet. All of these improvements have led to more of a need for a docking solution, if you want to attempt to use the iPad Pro as a desktop-like PC. MagicDock has appeared on Kickstarter, and it looks like one of the better iPad Pro docks we’ve seen so far.

It’s surprisingly similar to Kensington’s Surface Dock, and looks like it was at least based on the hinge design for Microsoft’s Surface Studio. Either way, MagicDock has some slight improvements over what is available on the Surface side. You can slot an iPad Pro in thanks to magnets, and it even rotates in place to allow you to use it in portrait orientation. It all charges via the iPad Pro’s USB-C port, which acts as the primary connection as the tablet slots into the dock.

As you’d expect from a dock, there are ports at the rear to connect up accessories or a monitor. There’s a HDMI port, a single USB-C port, a regular USB 3.0 port, and even a 3.5mm audio jack for headphones or speakers. The MagicDock will be compatible with the 11-inch and 12.9-inch 2018 iPad Pro models, but you’ll obviously have to pick the right one to match your iPad.

The dock is made from anodized aluminum and it looks relatively sturdy in the Kickstarter video, but like anything from Kickstarter you never know the true quality until the project is completed. The dock’s creator, Steve Warren, has considered most aspects of a modern docking solution, though. There’s even a microfiber cover where you attach your iPad Pro to protect the back of the device.

The fastest-growing MMA organization in the world is set to take the world of boxing by storm. BRAVE Combat Federation has announced that, in...
Read more
Inside Bahrain

The Capital Governorate has overseen, in cooperation with the Police Directorate, the distribution of 400,000 Iftar meals to expatriate workers, within the ‘Feena Khair’...
Entrepreneurial Journey

stc Bahrain, a world class digital enabler, will be hosting a series of virtual panel discussions, bringing together industry leaders and government entities on...
Wheels and Gears

The Open Government Partnership, an international multilateral initiative based in Washington, DC, has listed 13 Bahraini initiatives as examples to address the Coronavirus pandemic...
PR This Week

INJAZ Bahrain has recently concluded the fifth edition of its annual program, “INJAZ Talk”. The virtual talks were held remotely through a series of...
Management Principles