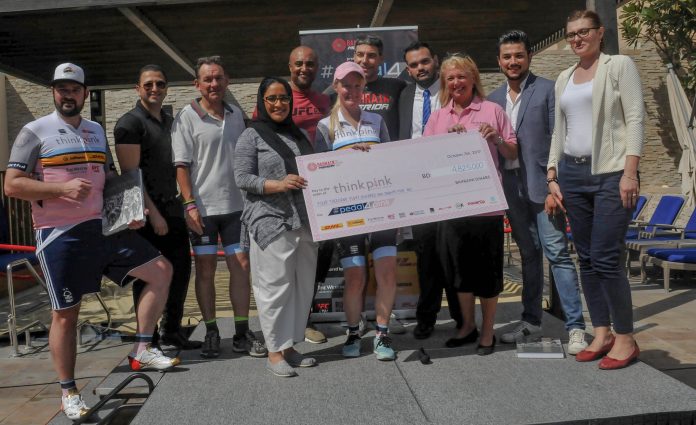 Manama sees 300 cyclists on the road for #pedal4pink

300 cyclists come together to support #Pedal4Pink for a fun ride around Manama. It is the inaugural charity event organized by Team Bahrain Merida in collaboration with Cycle Safe Bahrain to support Think Pink’s initiative to help them raise money to support their education and research fund, “It is only with research, education, early intervention and public awareness that we can fight this disease.” “Together we can make the difference” is the message they want to convey.

“We were very happy with the turnout of the event,” said Kolja Koracak, organizer of the event and representative of Team Bahrain Merida. “We didn’t expect these many cyclists to join as most of the team of Team Bahrain Merida are all over the world competing. We are very thankful to all the individuals and cycling groups including sponsors and volunteers who banded together for the cause. With all their support, we have raised close to BHD 5000/- for Think Pink Bahrain. We are also grateful to PowerUp for helping us with the registration. I am delighted that this event holds so much media attention, which will help us spread the message that ‘Together we can make a difference.’ Team Bahrain Merida would want to see more people helping us promote health and fitness in Bahrain through cycling.”

The fund ride began at 7 A.M, where the first group took off ahead at 28km/hr for a total of 45km, with the Bahrain International Defence Exhibition Conference (BIDEC) McLaren leading as the pilot car. The second group followed 5 minutes later at 20km/hr to cover 32km. The routes took them all over Bahrain starting from Seef area’s Westin, to Adliya, Juffair’s famous American Alley, around Bahrain Bay and back, where breakfast was waiting for them giving them a chance to socialize.

Think Pink founder Julie Sprakel expressed her thanks, “It was nice to see a different mix of people. The community spirit was certainly there, and it’s a great way to tie in what we believe in with health and fitness. We’re thrilled that Team Bahrain Merida selected us as their charity of choice for this event and we hope there will be more people in the future. It was very well received!”

“It was a fantastic ride and well-organised,” said Zee Bassila, Westin Bahrain City Center’s Complex Director of Sales, and General Manager Anna-Marie Dowling stated, ”We should have another one again next time.”

Richard Gale, Aviation Commercial Director of the Middle East and Africa, spoke on behalf of DHL, “We are proud and privileged to have had the opportunity to support such a great event for such a worthy cause. Well-organized and well-attended, we were delighted to be part of the big day. Well done to all involved!”

On the topic of breast cancer, Abdulmohsen Algosaibi of TriLife has said, “One thing is to push people to address issues at an earlier stage, so I encourage prevention instead, through living a healthier lifestyle and asking the right questions. It was a privilege to support such an initiative.”

Cycle Safe’s team also voiced their appreciation, “It was great to see other riders taking the initiative to help us martial other riders and keeping them safe while cycling.” They also thanked the police for maintaining safety and ensuring that traffic flows smoothly.

An overall success, it was the first time 300 cyclists rode around commercial and residential areas in Bahrain spreading awareness for a great cause, earning recognition from onlookers and passers-by.

Zain Bahrain, a leading telecommunications operator in the Kingdom of Bahrain, fuelled by the passion to empower Bahraini youth with specific skills, recently announced...
Sports This Week