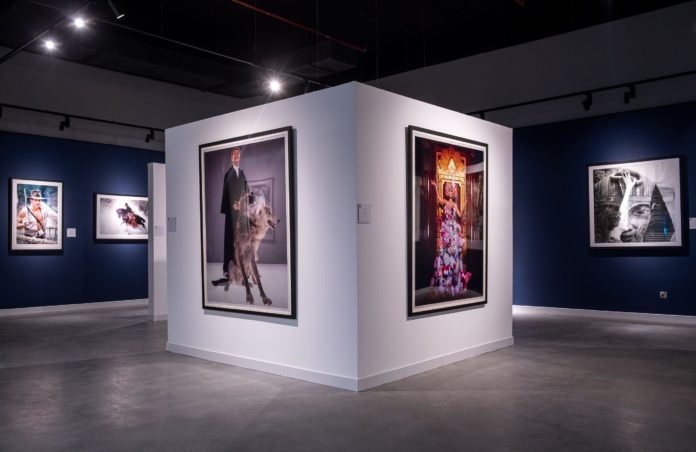 Masterpiece Fine Art, Dubai; the up-and-coming fine art dealership from the United Kingdom continues to make its mark in the United Arab Emirates by proudly announcing the launch of its third gallery space, located within the monumental architectural surroundings of Wafi City, Dubai. Known in the region to showcase legendary and historical artists, Masterpiece’s Gallery Three opened its doors to an extraordinary display of images of Hollywood stars, as well as works featuring iconic scenes across fashion and history. The exhibition titled ‘The silver screen and beyond’’, showcasing awe-inspiring images of Hollywood legends including Al Pacino, Harrison Ford, Sean Connery, Audrey Hepburn, Marilyn Monroe and many more, captured by fashion and film photographers from over the decades, will run until 31st January 2022. Having launched just in time for UAE’s 50th National Day celebrations, the gallery offered tourists and residents the perfect opportunity to explore art and culture in the heart of old Dubai.

Journey through the different eras of Hollywood with images taken by British photographer Terry O’Neill. Known for documenting fashion, styles, and celebrities, the exhibition features O’Neill’s best works including Audrey Hepburn captured with a Dove in the South of France in 1966, Ava Gardner photographed on the set of The Life and Times of Judge Roy Bean in Tucson in 1972 and Sean Connery on the set of Diamonds Are Forever in Las Vegas in 1971. Visitors will also be able to witness Hollywood in action throughout the 70’s and 80’s, with candidly captured images by Eva Sereny of Al Pacino on the set of Bobby Deerfield in 1977, Anthony Quinn in The Greek Tycoon in 1978, and Harrison Ford in one his most recognised roles as Indiana Jones in 1984 and 1989.

For those keen to discover works from across the fashion industry, the oeuvre of Markus Klinko, an award-winning, international fashion and celebrity photographer and director are another highlight of the exhibition. Klinko’s images have featured in popular magazines including Vogue, GQ, Vanity Fair, Harper’s Bazaar, and Interview Magazine over the decades, and now for the first time in Dubai, his noughties-nostalgia will be viewable first-hand with photography of David Bowie, Beyonce, Lady Gaga, Britney Spears, Kim Kardashian, and others. Another key exhibitor is Norman Parkinson; one of the most celebrated fashion photographers of the twentieth century who pioneered epic storytelling through his images. His photographs created the age of the supermodel and made

him the photographer of choice for celebrities and artists. Exuberating mystical Middle Eastern charm and bold fashion from the 60’s, Norman Parkinson’s ‘Queen of the Desert’ showcases fashion model Connie Barr horse-riding through the Giza desert in Egypt, wearing a chiffon printed dress by MacPhail with gold kid leather sandals from Charles Jourdan and jewels by Corocraft. The image was published as the variant cover of Queen magazine on February 13, 1963.

Finally, history connoisseurs will revel in the iconic works of George Rodger, previously exhibited at Masterpieces Gallery Two. The renowned war photojournalist who travelled across continents documenting life in several war-stricken countries including Iran, Burma, North Africa, Italy and many more, pays historical homage to the insights of life in the Middle East through his photographs. His work in the region covers narratives such as the life of Bedouin soldiers riding upon their camels, a soldier holding his tame hawk used for hunting birds, rays of light streaming through the ancient souqs of Baghdad, the grandeur of the Pyramids at Giza and royals like His Hashemite Highness Emir Adbullah ibn Hussein of Jordan, who later became the king of Jordan.

On the opening of Gallery Three, Alex Cousens, Masterpiece Fine Art, Dubai Executive Gallery Manager comments: “After the success of the first two galleries, we are proud to present our third gallery to visitors and potential buyers in the

region. ‘The silver screen and beyond’ is the perfect exhibition for us to launch Gallery Three, giving us the opportunity to bring these iconic photographs to the Middle East. The new space will be our flagship gallery and will allow us to make further masterpieces by internationally renowned artists and legends easily accessible to art collectors and enthusiasts based in the region.”

With the opening of Masterpieces’ Gallery Three within the Wafi City space, the international art establishment is firmly positioning itself as a leading destination for enthusiasts across all mediums of artistry. The diversity of its portfolio is a testament to its ongoing commitment to foster positive appreciation for new talents and old masters, and is a significant milestone to building a reputable art-scene in the heart of old Dubai.