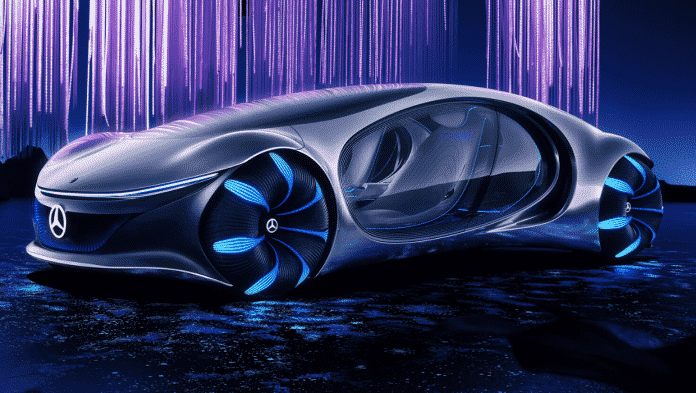 Mercedes-Benz has just pulled the wraps off of a wild new concept car that was inspired by the 2009 movie Avatar called — what else? — the Mercedes-Benz Vision AVTR. Designed with help from Avatar director James Cameron, this car is not the sequel that Cameron has promised. Instead, the AVTR concept car is a mix of everything that the Consumer Electronics Show is known for. It has outlandish styling, far-off future tech, and a tie-in with a major entertainment property. Oh, and it has scales!

Yes, the entire rear end of the AVTR is covered in 33 discrete scales. Mercedes-Benz calls them, “bionic flaps”. The company says it could be used to communicate with people outside the car. It also has special spherical wheels that Mercedes-Benz says were inspired by the “seeds of the Tree of Souls” from 2009’s Avatar. These wheels can rotate so that the AVTR can move sideways, or even diagonally. 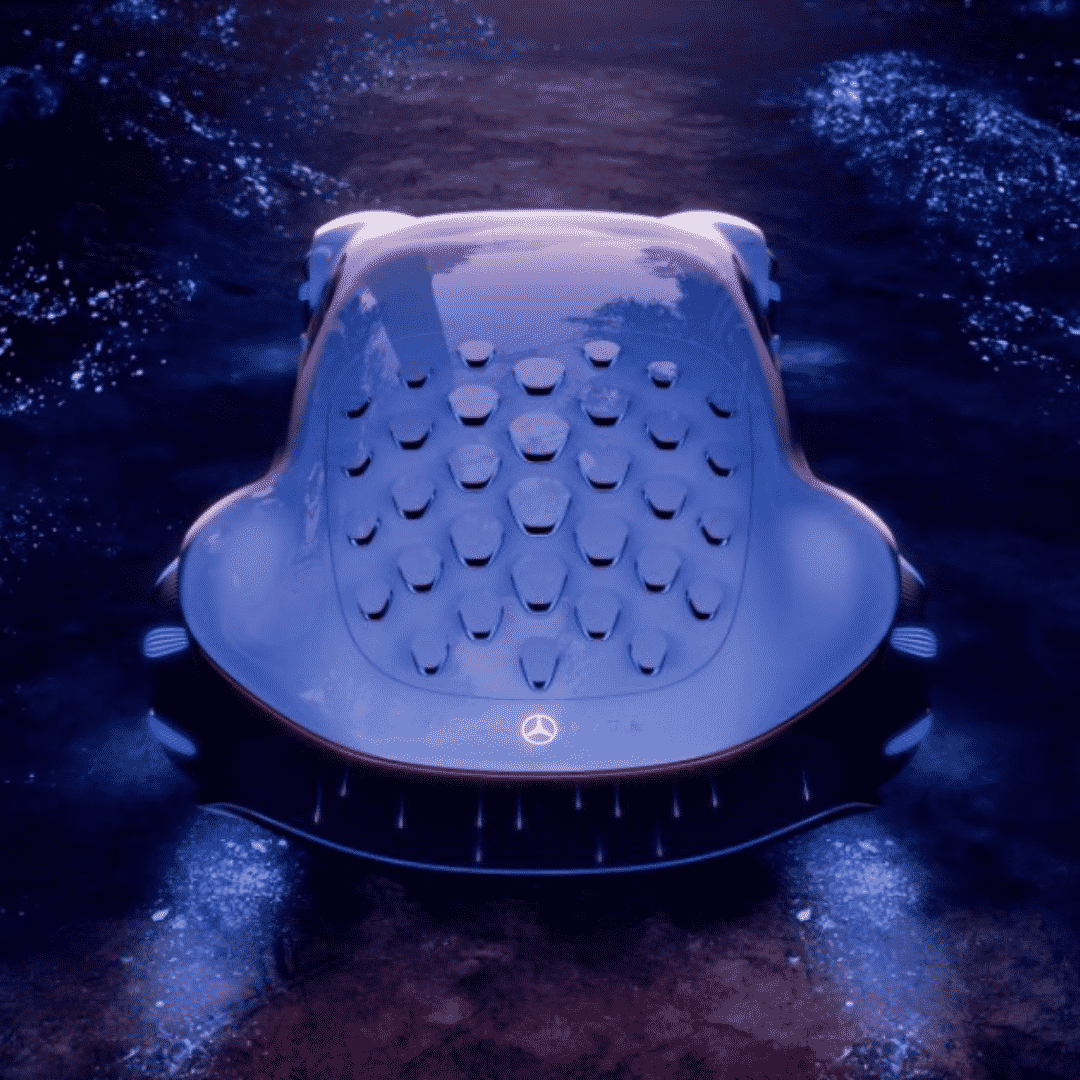 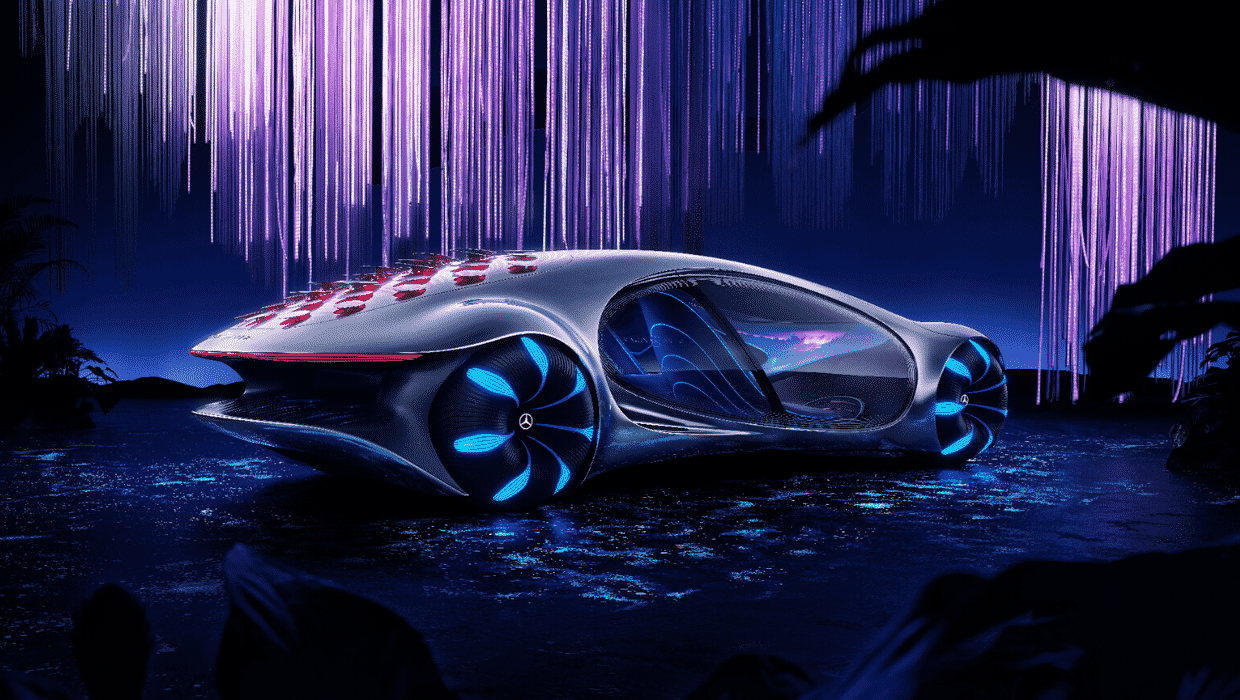 The Vision AVTR is meant to tease out what it’s like to ride in a car of the future. The inside of the car is relatively sparse. Mercedes-Benz has a lot of ideas about what might be possible inside something like the AVTR.

That starts with the lack of steering wheel. Since this futuristic car is obviously (theoretically) autonomous, there’s no need for one. Instead, passengers interact with the car through an oval-shaped controller. It accordions up and out of the center console to meet your hand. Once your hand is on the controller, it (and the seats) can vibrate along with the pace of your breathing and heart rate. Ola Källenius, the chairman of Mercedes-Benz’s parent company Daimler, said on stage Monday night that it’s an example of how man and machine might “literally merge.” 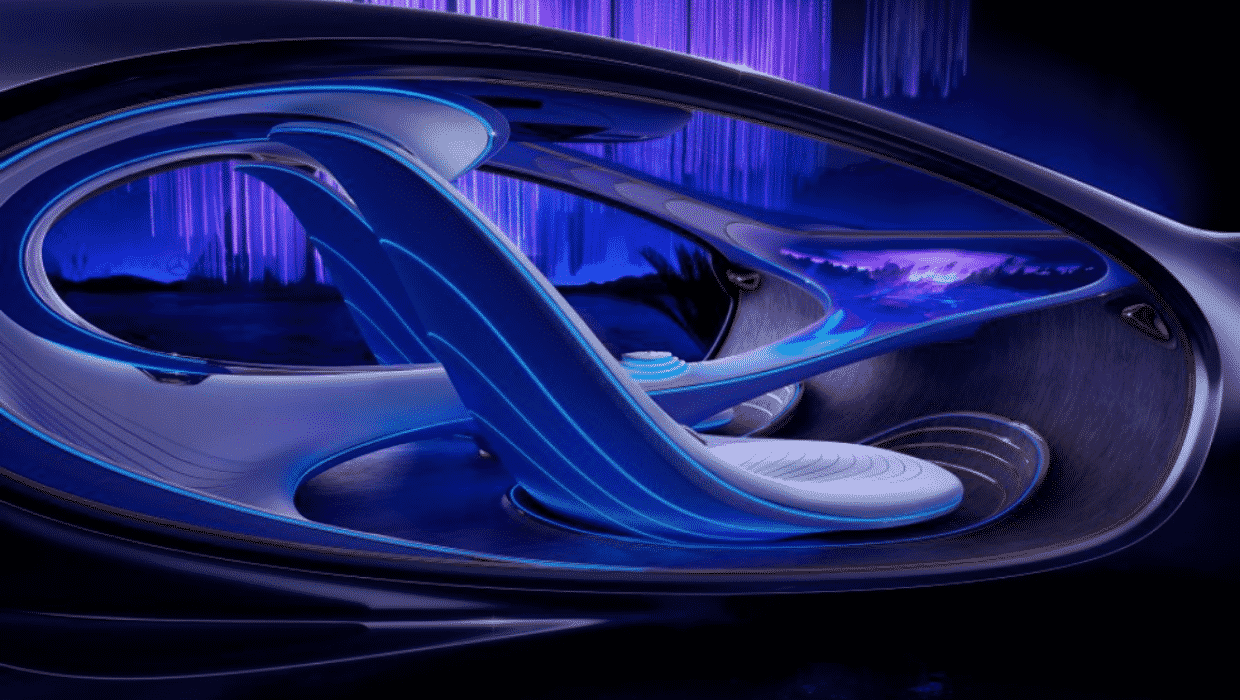 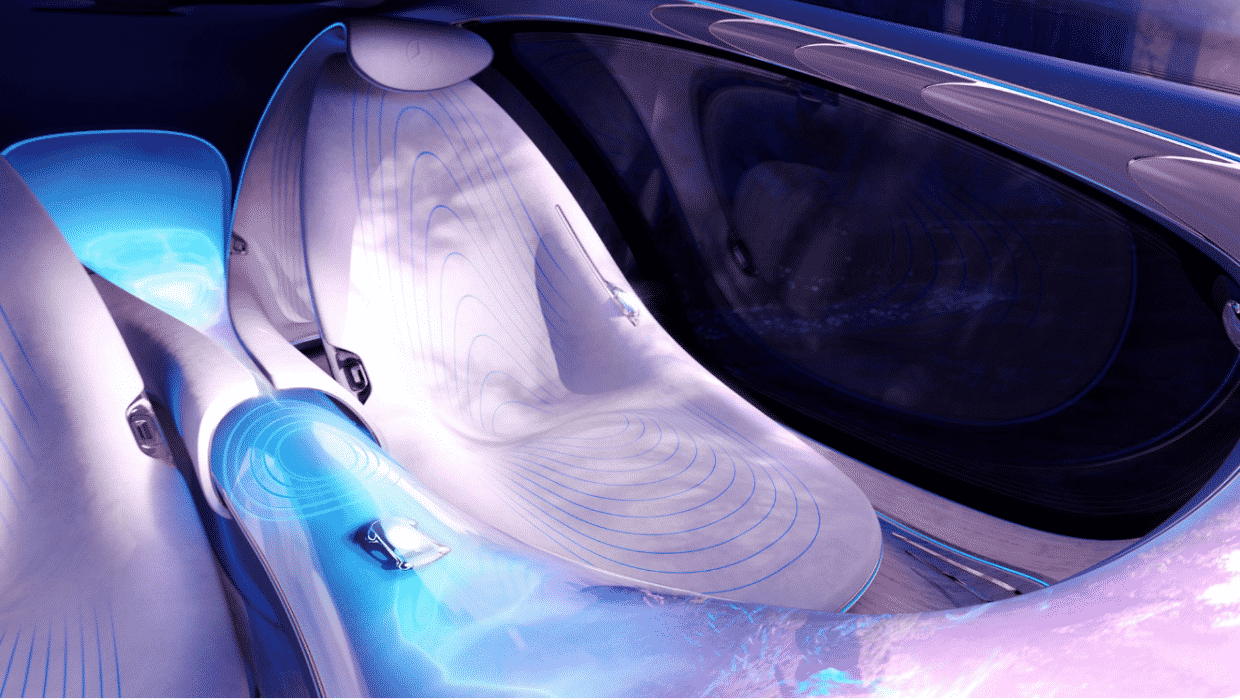 To that end, Mercedes-Benz likens this — seriously — to how the Na’vi physically connect with their banshees in the 2009 movie Avatar. And once passengers start moving in the AVTR car, the sweeping display in front of them can light up with 3D graphics of Pandora, the fictional world from the 2009 film Avatar. After Cameron joined Källenius on stage, he agreed with the chairman’s claim. “We will merge,” Cameron said.

More than just a Concept Car

Mercedes-Benz also spent a lot of time talking about how it designed the Vision AVTR with sustainability in mind. The concept car is “powered” by graphene-based organic battery
cells that don’t require rare earth minerals. The company says it may one day be compostable. The interior is made from recycled plastics and vegan leather. (It does not seem to employ any unobtanium, though.) Mercedes-Benz reps even said in a briefing that they believe the special spherical wheels would make less of an impact on the forest floor, should someone drive the AVTR there. 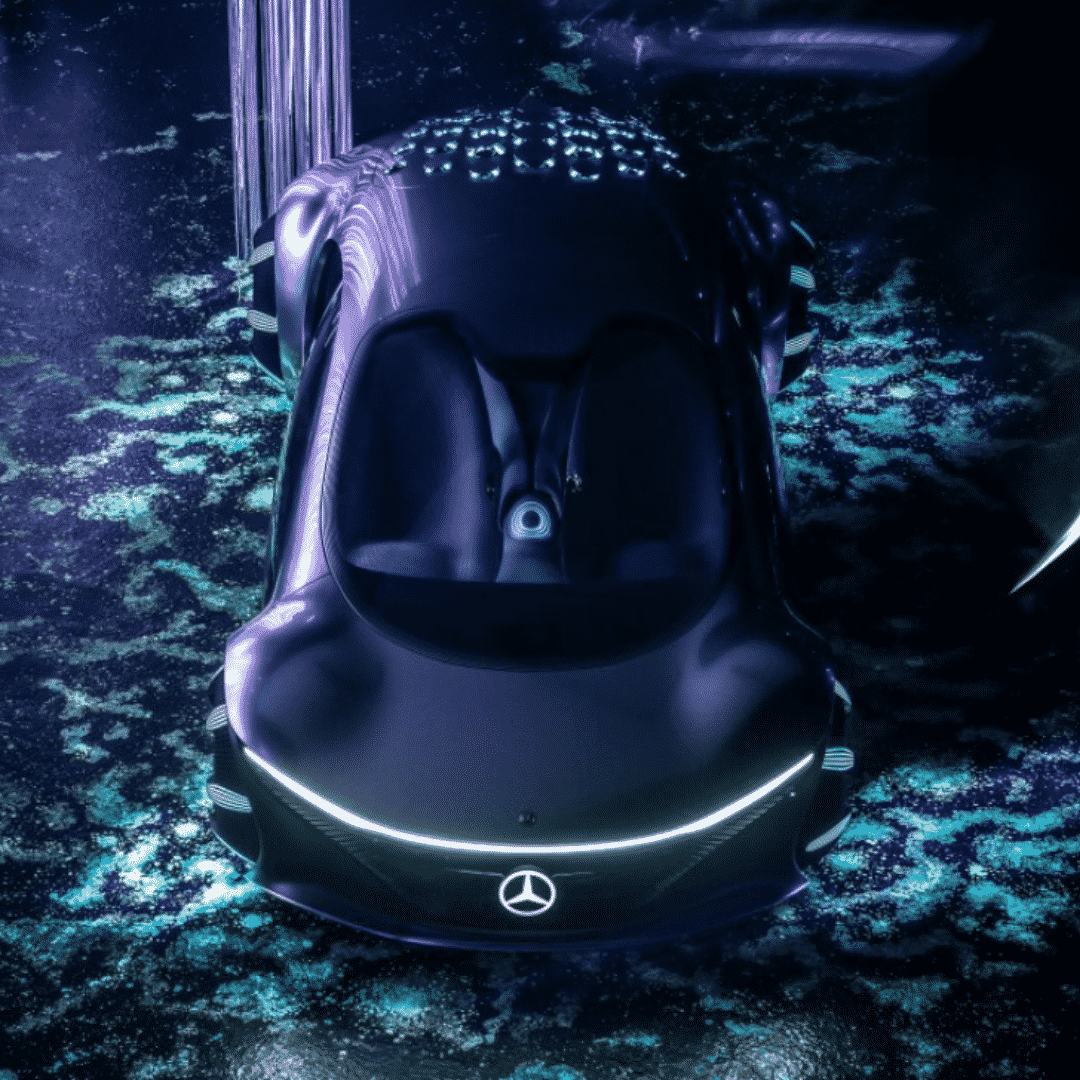 Mercedes-Benz is pushing this angle hard because, like the other major automakers, the company committed to a long-term goal of reducing its carbon footprint. It therefore sees something like AVTR as a literal and metaphorical vehicle for communicating those goals.

Motorcity, the exclusive distributor for SsangYong cars in Bahrain, has announced the arrival of the 2020 Tivoli. A compact SUV combining luxury, style and...
Read more
Wheels and Gears

Kanoo Motors is a leading high-end automotive retailer and the official distributor of McLaren in the Kingdom of Bahrain. It held the third annual...
Read more
Wheels and Gears

Bellissimo! Magnifico! Stupendo! All of these exclamatory Italian adjectives apply to the positively beautiful Ferrari Roma. The shapely coupe is the latest model to...
Read more
Wheels and Gears

Ebrahim K. Kanoo, the leading automotive retail and service provider in Bahrain, has announced the winners of the BF Goodrich and Michelin Tyres raffle...
Read more
Wheels and Gears

As events across the globe have been postponed due to spread of Coronavirus (COVID – 19), BRAVE CF was also proactive in postponing their...
Read more
Tech

Fitbit announced the latest evolution of its most popular family of devices, Fitbit Charge 4™ in Bahrain. The Charge 4 and Charge 4 Special...
Management Principles

While the world is fire-fighting the COVID-19 virus epidemic and not learning from many past disasters to establish a scientific Disaster Recovery Plans, it...
iGA

The National Bank of Bahrain (NBB) has announced that it is has extended its support to its Commercial and SME customers impacted by the...
© GO ALIVE MEDIA
MORE STORIES

Jaguar Land Rover goes beyond for safety and convenience with...