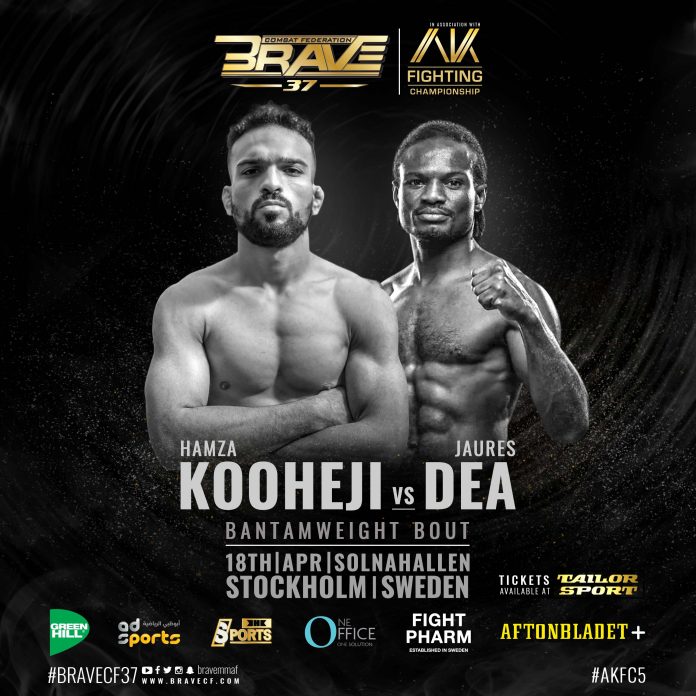 Bahrain’s biggest MMA fighter has a date for his return to competition. After an unforgettable homecoming at BRAVE CF 29, when he dominated Nahuel Gandolfi in front of a sold-out Bahraini audience, Hamza Kooheji will take his talents to Sweden. “The Pride of Bahrain” is set to welcome dangerous Jaures Dea to the Bantamweight division. BRAVE CF 37 is on April 18th in Sweden.

Kooheji will be defending a three-fight win streak. It culminated in the co-main event spot at BRAVE CF 29. Lifting up the Kingdom of Bahrain with an incredible performance. Knocking out “El Roble” in the third round and climbing up higher towards an eventual title shot.

Hamza has been hailed as a pioneer of mixed martial arts in the Kingdom of Bahrain. He has flown the flag in the highest of places and has become synonymous with the booming sport in the Kingdom. He is one of the biggest professional success stories.

In front of “The Pride of Bahrain”, lies a dangerous opponent. “The Crazy Cameroonian” is coming off four straight victories. Making his BRAVE Combat Federation debut against Kooheji as the number six Bantamweight fighter in the Middle East. Hamza is listed as number four in the region.

BRAVE CF 37 will be headlined by a gigantic title fight. Current Welterweight world champion Jarrah Al-Selawe looks to defend his crown against Khamzat Chimaev. Chimaev is the biggest prospect in Europe.

The show will take place at the Solnahallen, in Stockholm, Sweden, in partnership with AK Fighting Championship. It marks the third European show for BRAVE Combat Federation in 2020 so far. After a successful debut in Slovenia back in January and the upcoming BRAVE CF 36, in Romania, on April 13th.