On behalf of His Highness Sheikh Nasser...

The Information & eGovernment Authority has planned... 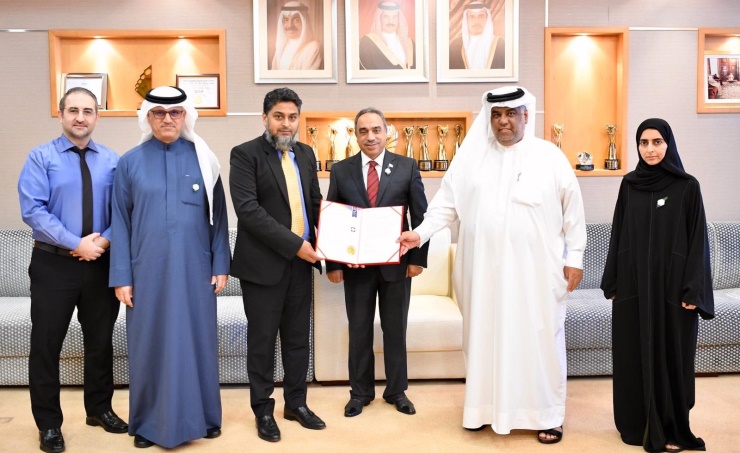 Works, Municipalities Affairs and Urban Planning, Essam bin Abdulla Khalaf, has affirmed the Ministry’s keenness to implement its strategy aimed at improving the quality of its customer services, through applying the best internationally-adopted practices.

This came as the minister received the Works Ministry’s Undersecretary for Municipalities Affairs, Shaikh Mohammed bin Ahmed Al Khalifa, the Muharraq Municipality’s Director-General, Ibrahim Al-Jowdar, the representatives of the quality management programme team at the Ministry, and those of the quality certificate-awarding company, marking the Muharraq Municipality’s obtaining the “ISO 9001: 2015 Quality Management System” certificate.

The minister said that he encourages programmes aimed at improving the quality of services delivered by the Works Ministry and seeks to push the development march forward.

Khalaf asserted that the Muharraq Municipality’s obtaining of the prestigious certificate confirms the quality services delivered by the Works Ministry to its clients, in line with the aspirations of the government, led by His Royal Highness Prince Salman bin Hamad Al Khalifa, the Crown Prince and Prime Minister.

He also commended the efforts exerted by all the relevant teams to implement the quality management programme, which led to Muharraq Municipality’s achievement.

Ibrahim Al-Jowdar said the Muharraq Municipality’s success in obtaining the “ISO” certificate is a step forward to continue improving its status and the quality of its customer services, in line with the Works Minister’s directives in this regard.