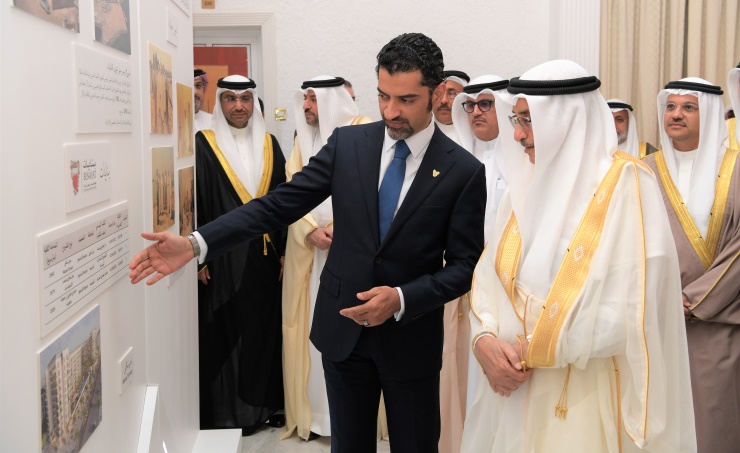 Deputy Prime Minister and Minister for Infrastructure, Shaikh Khalid bin Abdulla Al Khalifa, has asserted that municipal services are progressing steadily to keep pace with the demographic and urban development witnessed by the Kingdom, under the leadership of His Majesty King Hamad bin Isa Al Khalifa, and thanks to the follow-up of His Royal Highness Prince Salman bin Hamad Al Khalifa, the Crown Prince and Prime Minister.

He paid tribute to the national competencies in charge of managing, organising and providing municipal services, citing their keenness to harness their expertise and technical, administrative and professional skills to improve the quality of services in a way that contributes to maintaining the advanced level of the kingdom as a supportive environment for achieving sustainable development and meeting the citizens’ needs.

The Deputy Premier and Minister for Infrastructure made the statements while visiting today the Ministry of Municipalities’ Affairs and Agriculture to be informed about the progress and municipal projects.

Upon arrival, the Deputy Prime Minister and Minister for Infrastructure was welcomed by the Municipalities’ Affairs and Agriculture Minister, Wael bin Nasser Al-Mubarak, and a number of officials.

The Deputy Prime Minister was briefed by the Minister of Municipalities’ Affairs and Agriculture about the most important projects implemented by the Ministry during the current budget cycle at a total cost of more than BD 32 million.

Shaik Khalid bin Abdulla commended the role played by the Ministry’s Municipal One Stop Shop, which issues building permits for projects of all kinds, especially investment ones, through an advanced electronic system that enables engineering offices to submit and follow-up requests for building permits and pay service fees under one umbrella, commending the Ministry’s efforts to implement one of the most important policies of the Government Action Plan regarding the adoption of modern technologies and the promotion of the transition to electronic and digital services, which has contributed, alongside other factors, to the issuance of more than 1,100 building permits s far this year.

The Deputy Prime Minister indicated that the Construction sector contributed 7.1% to the kingdom’s GDP, according to the quarterly economic report for the second quarter of this year, adding that the sector grew by 2.6% at real prices, supported by 1.6% increase in areas of the building permits issued. He asserted that the sector witnessed a remarkable growth of 5.1% compared to the second quarter of 2021.

Shaikh Khalid bin Abdullah also expressed thanks to the real estate development companies that continue to provide the local market with more quality projects, which are licensed through the building permit system “Banayat”.

In this regard, he was briefed by the Managing Director of Eagle Hills Diyar, Maher Al Shaer, the developer of the Marassi Al Bahrain project, about the “Marassi Terraces” project, which is the largest residential building project in terms of an estimated cost of about BD 13 million, whose building permit was issued earlier this year.

On the sidelines of the visit, the Deputy Prime Minister inaugurated the developed website of the Ministry of Municipalities’ Affairs and Agriculture, which enables its users to benefit from about 75% of municipal services electronically.

Shaikh Khalid bin Abdulla attended the signing of an agreement to develop the “Boulevard Seef” project between the Ministry of Municipalities’ Affairs and Agriculture, and Realcorp company.

Under this agreement, the project, covering an area of more than 6,000 square metres, will be developed with a total investment value of BD 3.8 million during the 25-year contract period. It will serve as a friendly tourism and commercial centre for pedestrians and the environment, as well as recreational and dining destination.

He also witnessed the signing of a consultancy agreement for the restoration of the Ministry of Municipalities’ Affairs and Agriculture building between the Bahrain Authority for Culture and Antiquities, and Emaar Engineering Office.

Under the agreement, the two sides shall prepare the designs and oversee the restoration of the building to its original architectural features that date back to 1962 when it was inaugurated by HH Shaikh Isa bin Salman Al Khalifa, the then Ruler of Bahrain.

The Deputy Premier also attended the signing of a memorandum of understanding (MoU) between the Ministry of Municipalities’ Affairs and Agriculture and Bahrain Real Estate Investment Company (Edamah), the real – estate arm of Bahrain Mumtalakat Holding Company, the sovereign wealth fund of the Kingdom.

According to the MoU, the company shall develop the projects of the Ras Raya Port, Al Ghous Coast, the Segaya land, and the Tubli port, by suggesting the best ways to invest in them to improve the services provided.

Edamah will study the market, propose investment opportunities in these projects, study their feasibility, and prepare tenders.

Municipalities’ Affairs and Agriculture expressed, on behalf of all the Ministry’s affiliates, deepest thanks and gratitude to the Deputy Prime Minister and Minister for Infrastructure for the visit that reflects his keenness to follow up on the progress and municipal services, as they are among the priorities of the Ministerial Committee for Development and Infrastructure Projects.

In his speech, Minister Al-Mubarak also asserted that under HM the King’s comprehensive development process, and in line with the directives of the government, led by HRH the Crown Prince and Prime, Minister the Municipalities’ Affairs and Agriculture Ministry seeks to promote sustainable urban development through an integrated system of projects, programmes and services provided to the individual and society.

The aim of these projects is to improve the level and quality of services, enhance urban development and support the national economy, he said.