The Bahrain Tournament for Falcon and Hunting...

There is no doubt that social media... 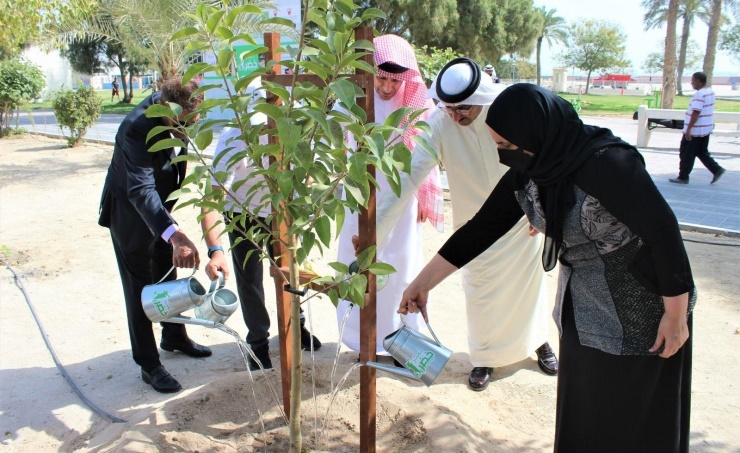 The first phase of the National Initiative for Agriculture Development (NIAD)’s Forever Green campaign was so successful that the objectives were exceeded by 26% and that plans are being drawn for phase II, NIAD Secretary-General Shaikha Maram bint Isa Al Khalifa has said.

The initial phase of the campaign (October-June) has succeeded in planting nearly 49,000 trees and shrubs, including 24,476 in partnership with the municipalities, on an area of 73,000 square meters and 23,000 linear meters.

The success of the NIAD-led campaign is a remarkable testament to a growing environment awareness and more committed movement for sustainability in Bahrain.

In a short time, the campaign oversaw 34 agricultural projects in various governorates and cities in the Kingdom, in cooperation with the Ministry of Works, the Ministry of Municipal Affairs and Agriculture, and the Supreme Council for the Environment.

Shaikha Maram said that the campaign proceeded according to a drawn-up plan whose details were developed from the first day of the campaign’s launch based on certain criteria to include planting trees and shrubs in 27 sites across the Kingdom.

The jump in the number of sites is attributed to the many extra requests received by the campaign from various sectors to participate in the first phase, which led to an increase in the number of locations by an estimated 26%, she added.

Such a positive reaction reflects the great sense of patriotism and responsibility towards society by private sector institutions, so that Bahrain, thanks to the support, is covered in green in all areas, NIAD Secretary-General said.

Announcing the end of the first phase of the Forever Green national campaign for afforestation on Wednesday, Shaikha Maram expressed her deep thanks and appreciation to governmental and private institutions, civil society institutions and individuals for their cooperation and solidarity to help make the national campaign for afforestation in its first stage a success.

The campaign was in response to the directives of His Royal Highness Prince Salman bin Hamad Al Khalifa, the Crown Prince and Prime Minister, in addressing climate challenges and supporting environmental initiatives and the state’s strategies through coordination with the public and private sectors to sustain the development of the agricultural sector in Bahrain.

It also aimed to highlight the aesthetic features of the Kingdom and its interest in agriculture as a historical heritage and strive to expand the green area with the energetic follow-up of Her Royal Highness Princess Sabeeka bint Ibrahim Al Khalifa, Wife of HM the King and President of NIAD’s Advisory Council.

Shaikha Maram commended the ministries and the private sector institutions for their contributions to the success of this campaign, which was marked by great interaction at all levels.

She noted the prominent role of the Ministry of Municipal Affairs and Agriculture and the municipalities of the four governorates during the campaign, which had a great impact on the achievements on the ground.

This success motivates us and everybody to move forward with confidence towards the second phase of the campaign, which will start, God willing, in October, she added.

Shaikha Maram made it clear that in order to strengthen the community partnership with civil society institutions and other relevant parties wishing to support the Forever Green campaign, NIAD has involved many institutions in supporting the campaign, totalling 36 consecutive participations with trees and shrubs in various cities and governorates of the Kingdom, at a total cost of more than BD10,000.

NIAD was launched by HRH Princess Sabeeka in March 2010. The initiative focuses mainly on protecting and developing the agricultural industry in Bahrain and on creating a balance between agricultural and developed lands, with the belief that such measures are vital for the overall health of the population and the future of food security.

NIAD thus aims to unify and support the efforts of the parties concerned with the agricultural sector in order to improve it and enable it to achieve its economic, social and environmental goals.