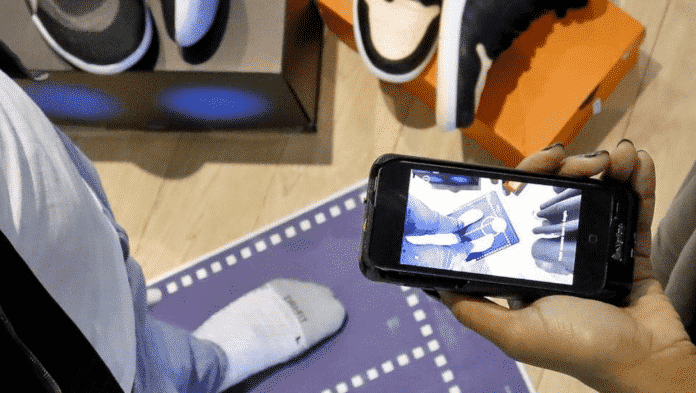 Nike uses AR to find you the perfect shoe size

Nike will add a foot-scanning tool on its iOS app this summer that will measure the length, width and other dimensions of customers’ feet after they point a smartphone camera to their toes. The feature called ‘Nike Fit’ will then tell shoppers what size to buy each of its shoes in, which Nike hopes will get you in the right fit and cut down on costly returns as it seeks to sell more of its goods through its websites and apps.

But Nike will also get something it has never had before: a flood of data on the feet of regular people, a potential goldmine for the shoe maker, which says it will use the information to improve the design of its shoes. Nike mainly relies on the feet of star athletes to build its kicks.

“Nikes will become better and better fitting shoes for you and everyone else,” says Michael Martin, who oversees Nike’s websites and apps.

Nike won’t sell or share the data to other companies, Martin says. And he says shoppers don’t have to save the foot scans to their Nike accounts. But if they do, they’ll only have to scan their feet once and Nike’s apps, websites and stores will know your dimensions every time you need to buy sneakers. Workers at Nike stores will also be equipped with iPods to do the scanning, replacing those metal sizing contraptions.

Netflix is letting people choose the speed at which they want to watch something on their phone or tablet with new playback controls. Netflix will...
Read more
Inside Bahrain

The Agriculture and Marine Resources Department at the Works, Municipalities Affairs and Urban Planning Ministry has announced that the ban on shrimping will be...
Spotlight

INJAZ Bahrain has recently conducted the 12th edition of Young Entrepreneurs Competition that witnessed student entrepreneurs from around the Kingdom competing to obtain the...
Tech

Your next Samsung Galaxy or iPhone may soon include the toughest gadget glass Corning has ever created. The company’s announcing Gorilla Glass Victus —...
PR This Week

As part of Accor Premium brands, Mövenpick Hotel Bahrain has received Accor #AllSafe label and was audited and also certified by Bureau Veritas on the 19th...
Inside Bahrain

The Charity Work section at the Sunni Endowments Directorate has distributed the Eid Al-Adha gifts and sacrifices, in coordination with charity societies across the...
PR This Week

Eid prayers to be performed at home

Eid prayers in Bahrain will be performed at home at 5:31 am on Friday, the Sunni Endowment Department has said. Mosques will proclaim the traditional...
Sports This Week

Bahraini trucks and their drivers will be allowed to resume their trips to the Kingdom of Saudi Arabia via the King Fahd Causeway today,...
Wheels and Gears

Land Rover in the Kingdom, has been awarded the enhanced status of an official Special Vehicles Operations (SVO) dealer. Bringing to Bahrain the first-of-its-kind...
iGA