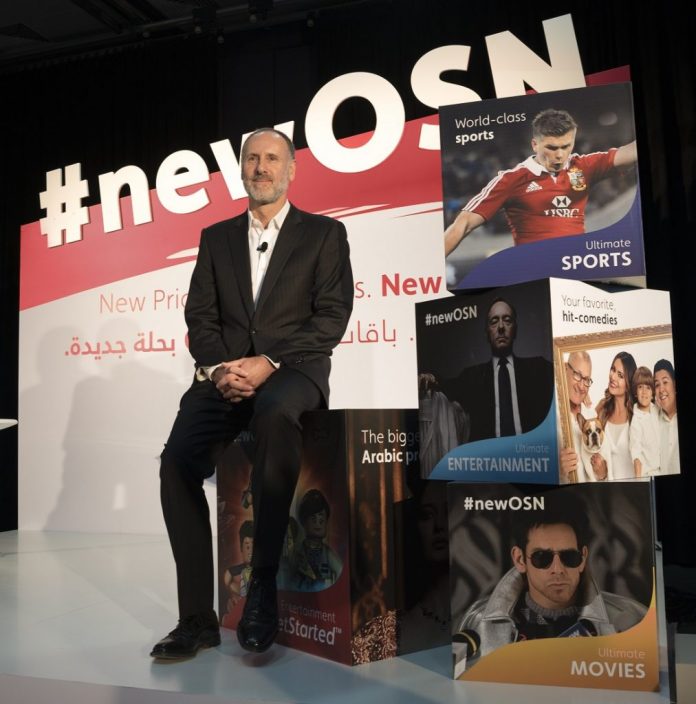 OSN today reinforced its position as the region’s leading entertainment network, launching new prices and new packs that will bring its unmatched breadth of world-class content to hundreds of thousands more subscribers.

The game-changing prices and packs are the first steps in a customer-first strategy that defines the ambitions of a #newOSN. The company is placing its emphasis on delivering extraordinary value, ensuring customers get affordable access to the latest and exclusive entertainment OSN is renowned for.

The company launches its ‘new prices, new packs, new OSN’ strategy today after over six months of extensive research. 40,000 households across the region were surveyed to find out what they wanted. Their answer was clear: choice, flexibility and great value.

With prices starting from just AED/SAR 79, the company is offering customers a choice of new sports, movies and entertainment packs that lets customers create their perfect mix and puts them in control of what they want to watch based on their available spending power.

Faisal Hamad Al Ayyar, Chairman of OSN, said: “OSN has consistently set benchmarks in the region’s entertainment landscape through its exclusive content partnerships and an unbeatable viewing experience. We are pushing the boundaries and making this value proposition available for one and all, marking a new era for the entertainment industry. This is the organic evolution of OSN, a response to what our customers want.”

OSN has streamlined the world of content it provides into convenient, easy-to-navigate packs that put customers in charge of their entertainment experience. From movies and sports, to series in Arabic, English, Tagalog and South Asian languages, new OSN opens doors to all the best content available at great value.

Leading the drive to bring OSN within the reach of all customers is the organisation’s new Chief Executive Officer, Martin Stewart. Widely acknowledged for his contribution to the European pay TV industry, Martin has served as Director General of ONO, a Spanish broadband communication and entertainment company, and as Chief Financial Officer for Sky, Europe’s leading entertainment company.

Martin said: “OSN’s ambition is to offer entertainment everywhere, for everyone, at a price that suits every pocket. We’ve listened to our customers and we’re delivering what they want, how they want it. Relevant, exclusive and affordable, our new prices and new packs will put the world of OSN – exclusive content and an unmatched viewing experience – within the reach of all. That is our mission and ambition, and we are committed to delivering on it.”

He added: “Television viewing habits have changed and with the new packs, customers can customise what they want to watch, paying only for their packages of choice. This is just the first step in an exciting journey ahead with a number of further initiatives this year as new OSN.”

OSN continues to strengthen its credentials as the home of the biggest Hollywood blockbusters, award-winning series at the same time as the U.S, unrivalled kid’s and family entertainment, talks-shows, Arabic programming as well as being the home of cricket and WWE and a plethora of can’t miss action sports.

OSN’s power to deliver the best content to the region was recently affirmed by its ground-breaking renewal deal with family entertainment giant Disney, and its exclusive deal with UFC, which brings the incredibly popular mixed martial arts shows to the network’s channels.

OSN’s deep and broad programming portfolio is unbeatable in this region with long-term exclusive deals with all the major international studios such as Disney, HBO, NBC Universal, Fox, Paramount, MGM, Sony and Warner Brothers, among others, ensuring customers always have a great line-up of ‘nowhere else’ content to enjoy.