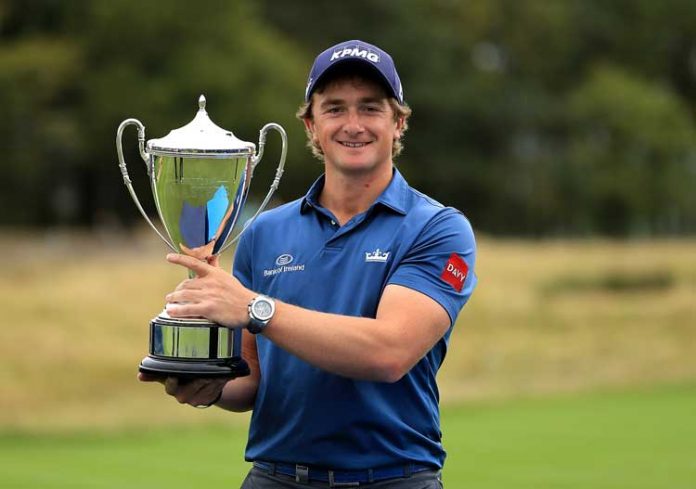 Paul Dunne won his first European Tour Title at the British Masters at Close House (UK) on Sunday, October 1st. Paul shot an impressive final round of 61 with an overall score of 20 under par. He resisted Rory McIlroy’s come back and finished with a 3 shot lead.

The Irish golfer played an exceptional last round scoring an Eagle on the par-5 of the sixth hole and another 7 birdies, two of which were on the 17th and 18th holes to finish in style.

The 24 year-old first made the headlines at the 2015 British Open Championship where he was tied for the lead after three rounds – a first for an amateur golfer since 1927. For the past two years, Paul Dunne had been showing some good form and came close to victory on several occasions.  Earlier this year in Morocco, he had lost out to Italian Edoardo Molinari at the first hole of a sudden death playoff.

Dunne commented: “I’ve come close before so it’s nice to get the demon off my back. The highlight of my round was the put I made on the 17th to make a birdie… once I holed that, I knew it was pretty much mine.”

Audemars Piguet is the oldest fine watchmaking manufacturer still in the hands of its founding families (Audemars and Piguet). Since 1875, the company has written some of the finest chapters in the history of Haute Horlogerie, including a number of world firsts. In the Vallée de Joux, at the heart of the Swiss Jura, numerous masterpieces are created in limited series embodying a remarkable degree of horological perfection, including daring sporty models, classic and traditional timepieces, splendid ladies’ jewellery-watches, as well as one-of-a-kind creations.

Obtaining or renewing visas in the Kingdom of Bahrain is a relatively simple procedure. All you need to do is ensure that your documents...
Read more
PR This Week