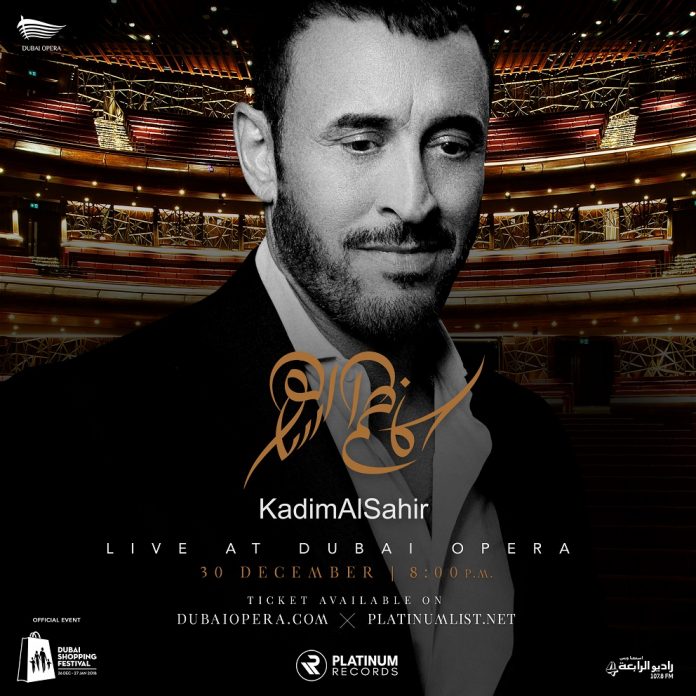 At his debut performance at Dubai Opera in Downtown Dubai, the singing sensation, Kadim Al Sahir, will perform a repertoire of his timeless classics, at a not-be-missed official Dubai Shopping Festival 2018 event.

“I am delighted to be performing at Dubai Opera, which has been hosting world-renowned shows. The venue is a true reflection of Dubai’s efforts to improve the quality of live entertainment,” said Kadim Al Sahir.

“It is an honor for me to perform at this world-class venue, and it is also a pleasure for me to meet with my fans who have been loyal and supportive throughout my career,” Kadim ‎added.

Hailed as ‘The Caesar of Arabic Music’ by legendary Syrian romantic poet Nizar Qabbani, the 60-year-old pan-Arab international artist has sold over 100 million albums during his music career of over 30 years and performed live to millions across the world.

Kadim, who currently lives in Spain, has been a pioneer in Arabic-international collaborations with various artists including Sarah Brightman on ‘The war is over,’ Lenny Kravitz on ‘We Want Peace,’ and Quincy Jones and RedOne on ‘Tomorrow (Bokra).’

A composer and songwriter, Kadim has won several awards including the famous BBC Radio 3 World Music Awards for ‘Best Middle Eastern/North African Artist’ and ‘Audience Award.’ His song ‘Ana Wa Leila’ is the only Arabic song to be listed among the ten best songs in the world on BBC World Service website. He has performed at the prestigious MGM Grand Las Vegas, USA, Royal Albert Hall in London, UK, Circus Maximus in Rome, Italy, and Beiteddine and Byblos in Lebanon.

The Labour and Social Development Ministry has announced the launch of the electronic employment procedures as of Monday, noting that job-seekers are now provided...
Spotlight