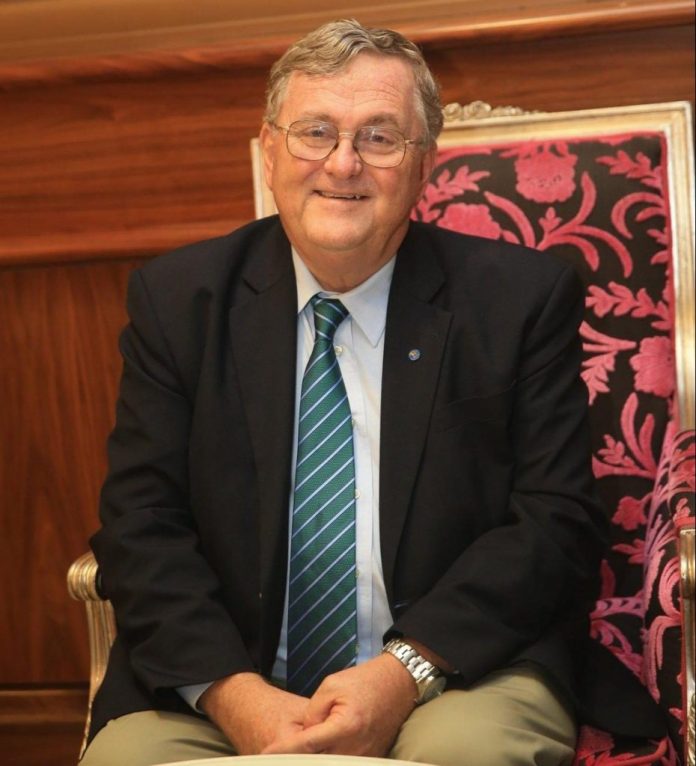 The World Arabian Horse Organisation (WAHO) is an international body established to preserve, improve and maintain the purity of the blood of horses of the Arabian breed and to promote public interest in the science of their breeding. Having ended the 2nd conference in Bahrain since 1998, WAHO President Peter Pond sits down exclusively with BTW to talk about the organisation’s history, objectives and challenges.

Tell us about WAHO and its history.

WAHO is unique in the world of horses. It’s one of the oldest organisations of its kind.

The concept of WAHO was developed by the Western breed societies and registries. In particular, the idea came out of the UK and it was taken up by Jay Stream in the US and Klaus Lewenhaupt in Sweden and they all came together in 1968 to discuss the possibility of the organisation.

Then it took two years of planning and in 1970 they had another meeting. In that two years, they also had a constitution made. In 1972 WAHO started off with half a dozen registries. And then soon Bahrain, Jordan, Egypt and Poland came in and these were all easy registries because they were well-founded, well-structured and well looked after and that made them simpler to approve. The harder countries like Syria, Iraq and Iran came in later.

In some of them, there were no established stud books and so they had to be identified and put into a book which is not something Middle Eastern people are accustomed to. A stud book is a Western idea of recording and not a Bedouin idea of recording. So a lot of trust had to be won over and that took quite a while.

But frankly, it’s been well worth. We now have around 68 registries and still some applying countries like China and Cuba

One of the big things that WAHO has done is made easy the commerce of the Arabian horse or their interchangeability for breeders.

What are some of the highlights from this year’s conference?

A lot of our work is now with applying countries. One of the biggest highlights of the conference is that we have a registrar’s meeting where registrars around the world come and talk to each other. So the people who actually do the work in the studbooks actually get to talk to each other, discuss future scientific methods and so on.

We also had a virtual rewrite of the constitution to allow in particular the nominations of the executive committee and a vote by the general assembly on new consultants.

I had made a commitment at the Qatar conference last time that we’d look into the constitution and involve the general assembly in a slighly more democratic process. It was also surprising that the approval only took about five minutes. I was expecting it to take an hour or more. I must admit I had a very big part in writing it.

What are some of the requirements for an Arabian horse to be ‘acceptable’ according to WAHO’s standards?

One of the most important decisions in WAHO was made in 1974 in Malmö in Sweden and that was the laying down of the definition of a purebred Arabian horse. To go into history, the Americans, British and everyone had a different definition of a horse. The executive committee took two years to come up with what I believe is a really intelligent, sensible and common-sense definition which read; A Purebred horse is one which is in a book acceptable to WAHO and is a purebred.

We ran with that definition quite a while since 1998. In that time the registries accepted the definition but it wasn’t mandatory for them to accept. But, in Bahrain in 1998, a decision was taken to make the acceptance of the WAHO definition mandatory. And from that day forward, its meant that a purebred Arabian horse can travel from one place but not be rejected on pedigree because its in a book. They need to check to see if its the right horse and the country that it is being imported to cannot reject it. It gives certainty to a breeder or an owner or a purchaser.

What are some of the challenges facing owners and breeders of Arabian horses?

We are very concerned about the
welfare of endurance horses in some countries. We made a commitment at
the conference that we would do everything in our power to communicate with the relevant authorities to try and
get that under control. Also WAHO has always managed to steer clear of politics. We had complete agreement amongst ourselves that we will co-operate with each other. I have detected of late some political pressures coming from some countries especially. There are other pressures like people trying to bring in everyday politics because they want to achieve something in WAHO for a different group.  I did mention during the conference that WAHO should be left alone from politics as it used to be – a big happy family.

What do you feel about Bahrain?

Bahrain has been a long-standing member of WAHO. The native Royal Bahraini horses are an extremely important part of WAHO membership. One of the most important decisions in WAHO regarding the definition of Arabian horses also took place in Bahrain in 1998. We will remember the conference here very fondly. We want to thank everyone in Bahrain for their support.

Tell us a bit about your background. How did you become involved with Arabian horses?

My family didn’t have horses. As a child I was always interested in horses and I can’t really tell you why but when I was able to have a horse in 1968 I said to my father that I wanted an Arabian although I don’t think I would be able to tell you at that time what an Arabian horse looked like.

I started with breeding purebred horses in 1968 and its been about 46 years now. I quickly became a judge in Australia and also managed to get onto the Australian societies board. I was there for 21 years of which nine years was Chairman. I did a lot of administrative work for the society. I started going to WAHO conferences and they appointed me as a consultant. I then became a full-member and was elected as secretary. When Jay Stream retired I became vice-president. And in 2014, I became president.

The National Space Science Agency (NSSA) has announced its online registration for university and high school students to participates in the NASA Space App...
Wheels and Gears