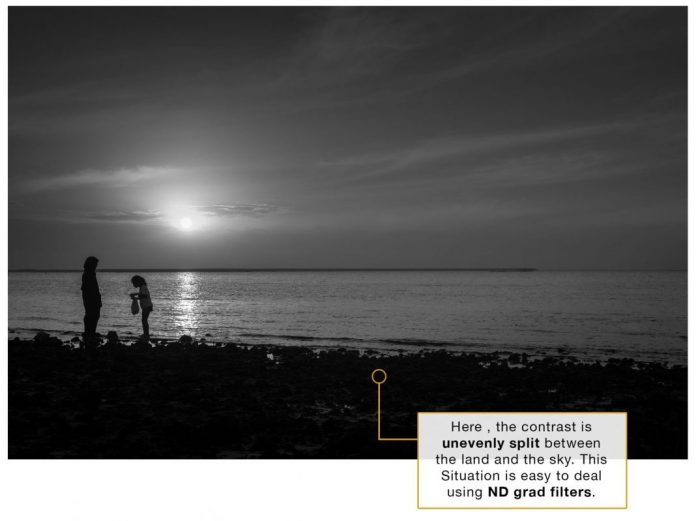 Contrast – the difference in brightness between the darkest and lightest parts of an image. Easy as it may sound from its description, Contrast is actually one of the complex attribute you will have to contend with as a photographer. One basic information to remember though, is that the camera records everything with a little more contrast than you do. A scene that seem perfectly balanced for you would actually appear to have darker shadows and brighter highlights when printed. Often times, the boost we use is enough to push extreme tones over the edge causing the image to lose its details.

It is much easier to shoot when the contrast is low, however, a flat shot would lack crispness and impact. Generally, Contrast is more likely to be uncomfortably high particularly during midday, so you will need to find a way to manipulate it.

Contrast is not particularly determined by the intensity of the light but by the amount of diffusion. Clouds or mist are the biggest natural diffuser available. They reduce the contrast by scattering light where some would fall into the shadow area/s of your subject. If you are working with direct sunlight, you need to remember that less light reaches shadow area/s and it will result to crisp and dark shadows in an image.

To find the best setting to use, I suggest that you do a test shot in and view it back. This way, you have the ability to assess and figure out whether the contrast you used is patchy or even. Doing this, you will be able to determine the appropriate technique to use according to your needs.

Watch this space for the last 2 techniques for reading the light conditions.

McLaren Automotive will bring the full force of its expertise in hybrid powertrain engineering to the supercar class next year with the introduction of...
Read more

Bahrain’s National Broadband Network (BNET), launched in October 2019 and responsible for providing broadband network services across the Kingdom of Bahrain, has opened its...
Sports This Week

Formula 1 announced that the 2021 FIA Formula One World Championship will open its season in Bahrain. This follows the postponement of the Australian...
Sports This Week

Bahrain Raid Xtreme driver, Nani Roma, set out from Yanbu bound for Jeddah for stage twelve, the final stage of the Dakar Rally 2021. Only...
PR This Week

Bahrain’s economy recorded a slight improvement of 1.40% in constant prices in the third quarter of 2020, compared to the second quarter of the...
Inside Bahrain

Neelanjana Bharadwaj needs no introduction for the readers of Bahrain This Week. She has inspired many readers with her weekly column “The Yoga Buzz”...
iGA

In line with the Kingdom of Bahrain’s commitment to develop its geospatial information sector, the newly formed National Committee for Geospatial Information Governance (NCGIG)...
PR This Week

Gulf Air, the national carrier of the Kingdom of Bahrain, announces that starting from 28 January 2021 it plans to move its entire operations...
Life Quotes

His Royal Highness Prince Salman bin Hamad Al Khalifa, the Crown Prince, Prime Minister and Chairman of the Economic Development Board (EDB) chaired the...
Inside Bahrain