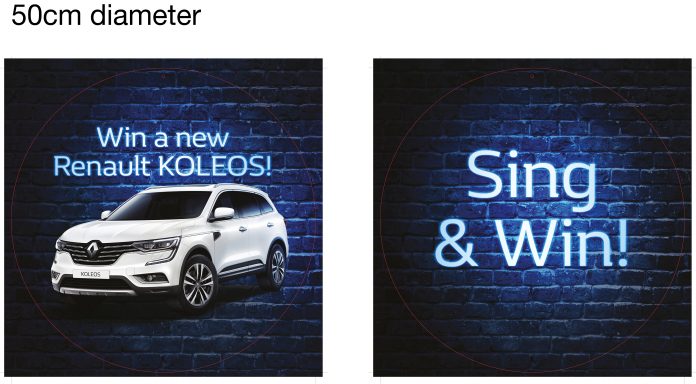 Renault Middle East has launched a singing competition across it’s showrooms to celebrate its Proud Sponsorship of the region’s biggest TV show; The Voice Arabia.

The ‘Koleos Karaoke’ competition will visit showrooms across the GCC for one weekend only, where customers who test drive any Renault model will automatically qualify to take part in the singing competition for a chance to win one of three brand-new Renault Koleos SUVs.

A custom-made recording studio has been installed inside Renault’s most popular* SUV allowing participants to read and sing song lyrics from Renault’s soundtrack on its Voice Arabia TV advert on a screen integrated into the dashboard, as well as film their performance on cameras mounted inside the car.

Each performance of the unique track, composed especially for Renault by music producer, Wael Kodeih, will appear on a dedicated websitewhere members of the public can vote for their favourite video performance. Each week, the five most popular videos will be short-listed and entered into a grand finale when, in the final week of the competition, three winning videos will be randomly selected in a prize draw andthe singers will be awarded a brand-new Renault Koleos.

Renault’s cleverly composed TV advert music track journeys through several genres of Arabic music from a traditional baladi rhythm to Lebanese hip hop and was inspired by Renault’s Multi-Sense® system which adapts the car to suit the driver’s mood by subtly changing aspects of the car’s handling from throttle pedal response, engine notes and steering weight,to the colours on the instrument display and interior lightingambience in the cabin.

Commenting on the partnership, Marwan Haidamous, Managing Director of Renault Middle East said, “The Voice is the region’s most popular TV show and attracts the world’s biggest brands as sponsors, so of course it was the natural choice for us to reach the show’s wide-ranging family audience in the Middle East. Now we’re inviting those families to come along to one of our showrooms, experience one of our cars for themselves and have some fun with the Koleos Karaoke whilst they’re with us.We are encouraging customers to embrace their ‘passion for life’ with us, and, you never know, if they record a memorable karaoke performance they could be driving away in a Koleos of their own!”

The Renault Koleos Karaoke competition will be in showrooms for one week only during the following weekends:

For more information and to watch videos from the competition visit www.koleoskaraoke.com.

Batelco is pleased to announce the introduction of same-day Home Delivery service starting from Thursday 26-March, to support the community during the current period...
Read more
iGA

The Information & eGovernment Authority (iGA), in collaboration with the National Taskforce for Combating the Coronavirus (COVID-19), has launched the “BeAware Bahrain” application. The...
iGA

Huawei offers users an extended warranty on a range of products. This as a precautionary measure based on recent public health and prevention considerations....
PR This Week

Education Minister, Dr. Majid bin Ali Al-Nuaimi, has affirmed that the Ministry of Education has succeeded in ensuring the continuity of its educational services...
Inside Bahrain

In line with the directives of the Government’s Executive Committee, chaired by His Royal Highness Prince Salman bin Hamad Al Khalifa, the Crown Prince,...
Entrepreneurial Journey

Many years ago I unfortunately had the habit of smoking. Actually I was not a chain smoker, but would enjoy five or six cigarettes...
Sports This Week

BRAVE Combat Federation, the biggest sports property in the history of Bahrain, has launched an awareness campaign to combat the spread of Coronavirus worldwide,...
Sports This Week

The National Taskforce for Combating the Coronavirus (COVID-19) held a press conference highlighting updates on national efforts and strategies to prevent the spread of...
Tech

In line with ongoing efforts to prevent the spread of the Coronavirus (COVID-19), the Ministry of Health today announced it has started conducting field...
© GO ALIVE MEDIA
MORE STORIES