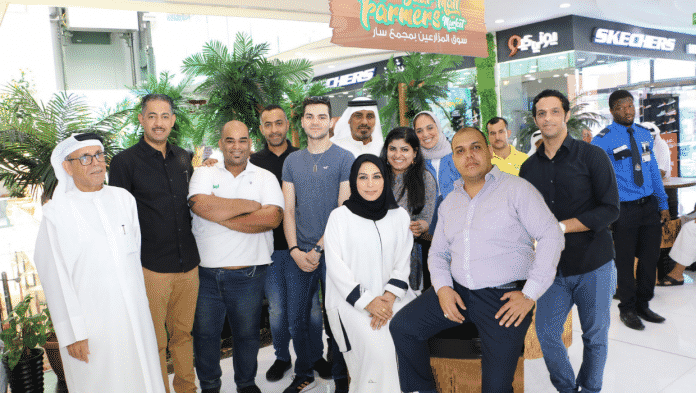 Inspired by the concept of Budaiya’s Farmer’s Market, the Saar Mall team, brought the concept of farmers’ market inside the mall for the first time with the Bahraini vendors. SAAR MALL Farmers market target was for promoting Bahrain’s agricultural products and highlighting the development-taking place in Bahrain’s agricultural sector. It also aimed to contribute to improving the Bahraini Farmers income.

The farmers’ market in Saar maalhas had huge amount of visitors and the market has been a huge success. Saar mall team organized the Promising experience; and the market was launched on June 29. The market covered the ground floor space of Saar Mall.

Saar mall looks forward to organize Farmers Market on a larger scale next year during this time. People can enjoy their breakfast; buy plants and local fruits, vegetables and dates all under one roof at a low price. The Bahraini farmers were encouraged to offer competitive prices to attract more shoppers in order for their produce to reach the largest chunk of citizens and residents.

Group CEO of Saar mall and BOKHOWA GROUP Mr. Hassan Abdulla Ali Bokhowa said that the market has been successfully fulfilling the demand for locally produced fruits and vegetables. The market has been an immense success. Since its opening, the market has attracted a large number of visitors, as well as the official visits especially in the closing ceremony. The farmers market also attended many important personalities, including: Mr. Ali Al Asfoor, Governor of the Northern Governorate and Ahmed Al-Kooheji, Chairman of Northern Municipal Council.

Esmahan Bokhowa Saar Mall manager promised that Saar Mall Farmers Market would continue to host the event to give visitors the feeling of the Bahraini Farmers Market that usually is conducted in Budaiya at winter.

“It is sad to say goodbye to the farmers’ market in Saar and we hope that this most spectacular event will be repeated in the coming months,” said a seasonal fruit seller at Saar.

The market was a perfect balance between the beautiful venue, delicious food, affordability and staff professionalism, customers mentioned in their comments.

The novel coronavirus (COVID-19) pandemic has affected all of us in different ways, some more severely than others. To help the Bahraini Community  overcome...
Read more
Inside Bahrain