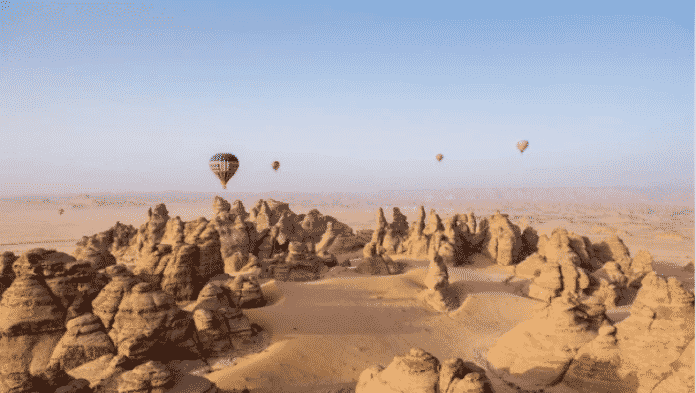 The Saudi Arabian Hot Air Ballooning (SAHAB) Federation officially opened its headquarters in Al-Ula. As part of the inaugural celebrations for the SAHAB Federation’s newly established base, seven hot air balloons captained by pilots from around the world took to the skies above Al-Ula.

The federation’s establishment follows the success of the inaugural Hot Air Balloon Festival during the  popular Winter at Tantora Festival earlier this year, when 100 balloons lit up the skies on several nights.

Winter at Tantora was a major step in the promotion of Al-Ula — widely recognized as one of the Kingdom’s most beautiful locations — as a tourism destination, and the Hot Air Balloon Festival presented a blueprint for adventure tourism in Saudi.

Amr Al-Madani, the newly appointed president of the SAHAB Federation, and CEO of the Royal Commission for Al-Ula (RCU), said in a statement, “Hot air ballooning is the perfect activity to accompany the peace, serenity and extraordinary beauty of the Al-Ula landscape. The launch of the SAHAB Federation’s headquarters in Al-Ula is a commitment to enable and grow an exciting hobby in the Kingdom.

With a mission to develop the Saudi aerostation industry in all its forms, we look forward to providing a platform for meaningful experiences in the Kingdom’s skies for adventure enthusiasts and families alike.”

A press release from the federation claimed that its establishment will also benefit the local community “by generating new and rewarding career opportunities in the world of adventure tourism.”

The federation will work in partnership with the Saudi Arabian Olympic Committee and the RCU to “develop a thriving ballooning community of hobbyists and adventure-seekers within the Kingdom and around the world,” the release continued.

Will Smith takes on the deepest pool on Earth, Deep Dive Dubai

Rotary Club of Salmaniya collects plastic bottles for a cause