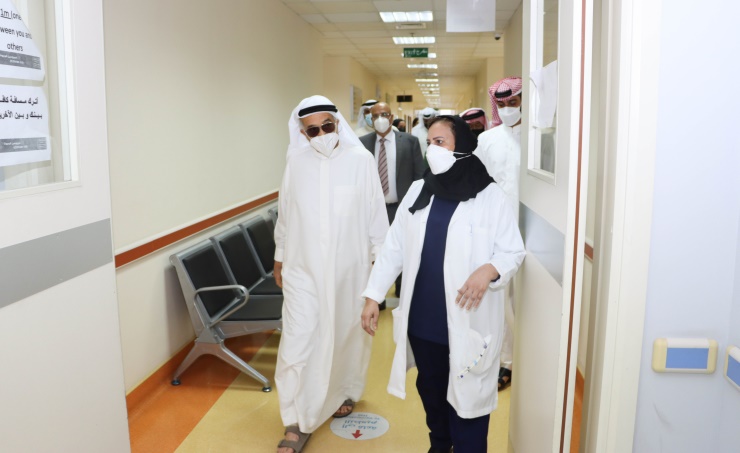 In this context, the SCH President paid an inspection visit to the Bank of Bahrain and Kuwait (BBK) Health Centre in Hidd, in Muharraq, which was chosen alongside Halat Bumaher health Centre in Muharraq to provide services around the clock.

Lt. General Dr. Shaikh Mohammed bin Abdullah Al Khalifa got informed about the Bank of Bahrain and Kuwait Centre departments, in the presence of SCH Secretary General Ebrahim Ali Al Nawakhdha and a number of officials. He praised the centre’s distinguished standard and its advanced equipment and capabilities. He also reviewed progress in the self-management project of the primary healthcare centres which is currently undergoing a trial phase in Muharraq before it is generalized in all the governorates.

The SCH President praised keenness of all to inform the citizens in Muharraq about “Choose Your Doctor” programme, which falls under the umbrella of the project. He stressed that the self-management project is in concordance with the government’s programme and embodies the goals emanating from Bahrain Economic Vision 2030. He added it is also part of the national initiatives to continuously optimize health services and ensure their sustainability.

For his part, Dr. Abdulwahab Mohammed, Chairman of the Board of Trustees of Primary Health Care, shed light on the self-management programme, which aims to transform the health centers into self-managed centers in order to improve the quality of healthcare services. He noted that the project aims to give citizens freedom of choice and provide treatment paths to develop the quality of services, ensure coordination between the service providers, improve control and decision-making, and ensure optimal use of financial and human resources.