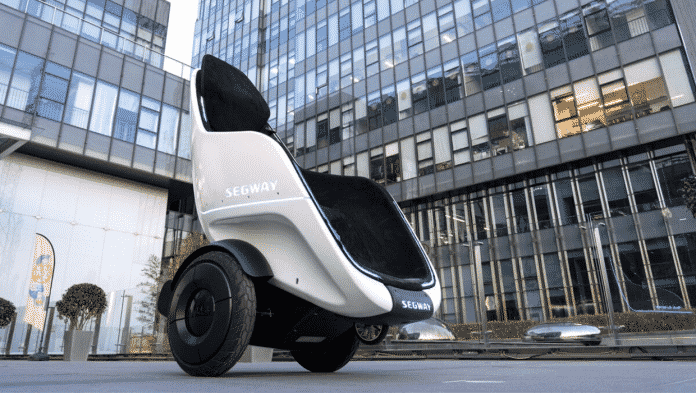 Segway’s newest self-balancing vehicle won’t require you to stand up. Dubbed the S-Pod, the new egg-shaped two-wheeler from Segway-Ninebot is meant to let people sit while they effortlessly cruise around campuses, theme parks, airports, and maybe even cities — all of the same places you’d expect to see one of the company’s iconic (if still a bit dorky) stand-up vehicles.

The S-Pod is powered by the gyroscopic self-balancing technology similar to a traditional Segway. The traditional Segway is driven by leaning forward, backward, and to the sides. A little joystick at the right side of the seat controls the S-Pod. Segway says its self-balancing technology will always keep the chair level. The two-wheel setup will allow for quick changes in direction even while stopped.

The gyrosphere on Jurassic World inspired the S-Pod. It’s top speed is a whopping 24 miles per hour, more terrifying than being chased by a dinosaur.

The company tells that the S-Pod will debut in the third quarter of 2020. It plans to sell them to the public after that, possibly in 2021. Segway did not say how much the S-Pod will cost, though.

S-Pod Debut and other products

The S-Pod is just one of a number of electric vehicles Segway-Ninebot is unveiling at the Consumer Electronics Show in Las Vegas. In December, the Chinese mobility giant announced a lineup of electric motor scooters and mopeds. These will make their debut at the show. This morning, the company also teased two new e-scooters, one of which uses a sort of kick-powered cruise control technology.

But the S-Pod is something much different. It’s easy to see how Segway-Ninebot may want to turn a vehicle like this into something that doesn’t need to be driven at all, as it seems like it may be easier to automate than the traditional stand-up Segway. Until then, though, expect to see Segway-Ninebot try to make the S-Pod catch on in the same sorts of use cases the traditional Segway did (think mall cops and sightseeing tours) while also offering an option for people who either can’t or don’t want to stand for prolonged periods of time.

Motorcity, the exclusive distributor for SsangYong cars in Bahrain, has announced the arrival of the 2020 Tivoli. A compact SUV combining luxury, style and...
Read more
Wheels and Gears

Kanoo Motors is a leading high-end automotive retailer and the official distributor of McLaren in the Kingdom of Bahrain. It held the third annual...
Read more
Wheels and Gears

Bellissimo! Magnifico! Stupendo! All of these exclamatory Italian adjectives apply to the positively beautiful Ferrari Roma. The shapely coupe is the latest model to...
Read more
Wheels and Gears

Ebrahim K. Kanoo, the leading automotive retail and service provider in Bahrain, has announced the winners of the BF Goodrich and Michelin Tyres raffle...
Read more
Wheels and Gears

Our Al Adil group has always focused on delivering pure, clean and safe products to customers. Hence we have implemented state-of-the-art technology for packaging,...
Read more
PR This Week

AlMabarrah AlKhalifia Foundation has announced its readiness to implement “Jaser” a first-of-its-kind initiative in the Kingdom of Bahrain, which includes a “Remote Work” platform...
Sports This Week

Jaguar Land Rover goes beyond for safety and convenience with...