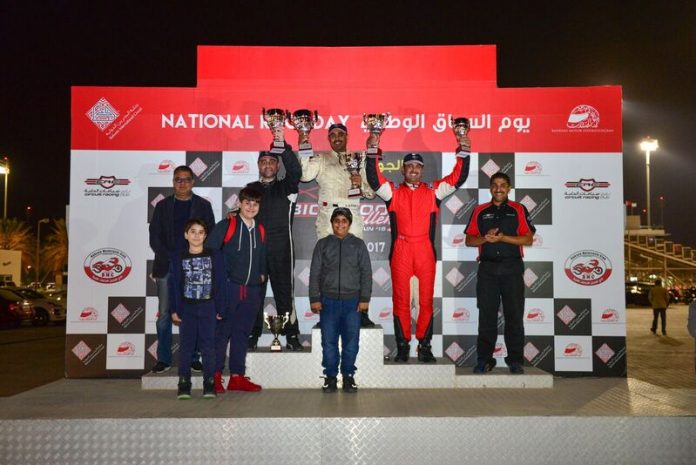 Mishal Alneaimi and Ali Alshammari, meanwhile, were well on their way to joining Shaikh Hamad for double celebrations in their respective race series. But a penalty for each prevented them from doing so, and Alneaimi eventually had to share honours with Mike Edwards in the Bahrain Superbike Championship (BSBK), while Alshammari and Mohammed Adhan Al Zaidan came away with a win apiece in the Bahrain Motorcycle Racing 600 (BMR 600).

Both the BSBK and BMR 600 were also holding the third round of their respective 2016/2017 seasons. Together with the BIC 2,000cc Challenge, they made up National Race Day at BIC, with all the action taking place along the Sakhir facility’s 2.55-kilometre Inner Track.

Racing later switched to BIC’s quarter-mile drag strip on Friday night for round three of the 2016/2017 Bahrain Drag Racing Championship-Arabia Pro Series. The heated head-to-head battles only ended in the early hours of Saturday morning.

In the BIC 2,000cc Challenge, Shaikh Hamad made a rousing debut to the current season and showed the rest of the field why he is a former champion.

Driving a white Honda CIVIC hatchback, Shaikh Hamad emerged on the winning end of an intense battle with rival competitor Raed Himmo in both 2,000cc races.

Himmo, who was also driving a CIVIC, was the pole-sitter for race one and he enjoyed a strong start, keeping his position heading into the first turn despite significant pressure from Shaikh Hamad and defending champion Shaikh Salman bin Isa bin Ebrahim Al Khalifa, who was starting alongside Himmo on the front row and also driving a CIVIC.

After numerous unsuccessful attempts earlier in the race, Shaikh Hamad finally got the better of Himmo on lap seven. Shaikh Hamad never looked back from there, and gradually built a comfortable lead en route to taking the chequered flag in a total time of 15 minutes 54.575 seconds. He finished 6.994 seconds ahead of Shaikh Salman who managed to clinch the runner-up spot. Himmo had to settle for third 9.654s behind the winner.

Tim Birkin (+18.251s) was classified fourth in a Honda Integra and Abdulla Ali (+26.326s) in a GT86 was fifth, while rounding out the top six was Mohamed Faqihi (+27.366s), also in a CIVIC, amongst a healthy field of 14 drivers. Faqihi was given a 10-second penalty following an incident with Birkin.

In the second race, Himmo charged to the front from his starting position on row six and did well to hold the lead for much of the race. He and Shaikh Hamad were neck-and-neck with only two-tenths-of-a-second separating the pair, with Shaikh Salman right behind them.

It was an intense and entertaining battle between Himmo and Shaikh Hamad for much of the 12 laps. Shaikh Hamad finally secured the advantage with only two laps to go, and in the end, only 0.331 seconds separated the top two. Despite starting from last place, Shaikh Hamad won in 15:57.300. Shaikh Salman was a close third, finishing 2.486s behind his victorious younger brother.

In the BSBK, where competitors were riding on identical Ducati 899 Panigale sports bikes, it should have been business as usual for Qatar-based defending champion Mishal Alneaimi, but a 10-second penalty in the first race cost him a fine double and finally ended his unbeaten streak in the series.

Also on National Race Day on Friday at “The Home of Motorsport in the Middle East”, Alshammari took race one in the BMR 600 in 13:26.545. Competing in the Superstock class and riding a Kawasaki ZX6R, the Qatari completed the event’s 11 laps in 13:26.545.

In race two, Al Zaidan was awarded the victory after Alshammari was given a 10-second penalty due to a jump start. Al Shuaibi made it into second 1.360s behind Al Zaidan, while Alshammari had to settle for third with a 1.639s gap from the top on the final classification. Adiby (+10.734s), Al Eidi (+21.747s) and Nasser Al Khadra (+32.061s) were in the top six amongst the Superstock riders.

In the Hornets class, Najjar, Ebrahim and Heemskerk returned to the podium in that finishing order.