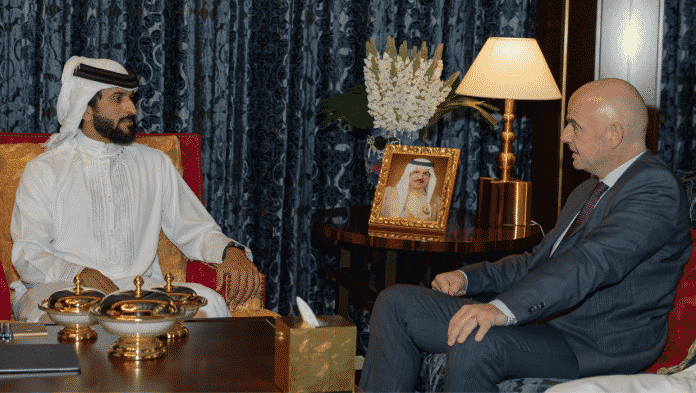 His Highness Shaikh Nasser bin Hamad Al Khalifa, Representative of HM the King for Charity Works and Youth Affairs and President of the Supreme Council for Youth and Sports, hailed the support shown by Mr. Gianni Infantino, President of the Fédération Internationale de Football Association (FIFA) towards the improvement and development of Bahrain’s football sport and to elevate it to the highest level.

HH Shaikh Nasser’s remarks came while receiving in his office Mr. Infantino, who  visited  the Kingdom of Bahrain. During the meeting, HH Shaikh Nasser discussed with the FIFA President the means to continue upgrading the football sport in Bahrain.

“Football enjoys the interest and sponsorship of His Majesty King Hamad bin Isa Al Khalifa, and the support of His Royal Highness Prince Khalifa bin Salman Al Khalifa, the Prime Minister, and His Royal Highness Prince Salman bin Hamad Al Khalifa, the Crown Prince, Deputy Supreme Commander and First Deputy Prime Minister. Thanks to this generous sponsorship and support, the youth and sports movement in the Kingdom have been meeting the desired goals and we are very motivated to accomplish more successes in this vital field,” HH Shaikh Nasser said.

HH Shaikh Nasser also praised during the meeting the achievements that have been attained by FIFA in the Mr. Infantino’s presidency of the federation, stating that the football world governing body will continue making more successes at the administrative and the technical levels, which will positively impact the football associations falling under its umbrella across the world.

“Bahraini football has greatly benefited from the support and programmes designed by FIFA, reflecting the fruitful cooperation between the Kingdom and the international federation,” HH Shaikh Nasser commented.

His Highness added: “We believe in a genuine partnership with FIFA that will pave the way for us to take advantage of its expertise and qualified cadres who have been sharing with us invaluable advices. I take this opportunity to thank the President for his sincere efforts and support to all the associations under FIFA, the Bahrain Football Association in particular.”

HH Shaikh Nasser also recalled Mr. Infantino’s previous visit to the Kingdom of Bahrain, mentioning that it generated broad benefits for the Kingdom’s football, adding that his visit confirms his interest and keenness to personally follow-up on all the football-related issues in Bahrain.

On his part, Mr. Infantino expressed his utmost appreciation and thanks to HH Shaikh Nasser for his warm reception and hospitality, as well as his keenness to improve Bahrain’s football sport, pointing out that the Kingdom has made a quantum leap in this field.