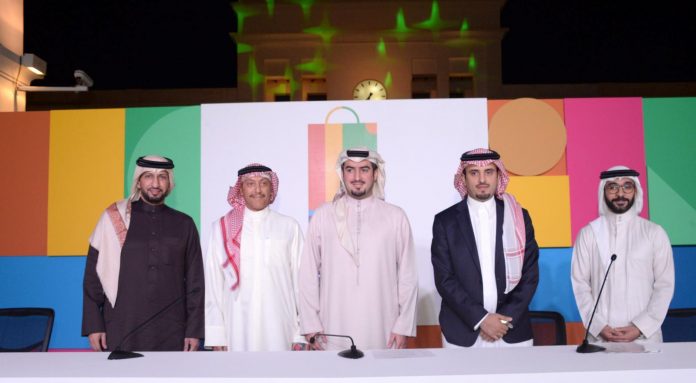 The 5th edition of the Bahrain Shopping Festival – ‘Shop Bahrain’ – is set to be the biggest nationwide Festival with a unique line-up of events and entertainment, a fantastic shopping experience and numerous prizes.

The 30-day event, aimed at celebrating the Kingdom’s hospitality and tourism offering, will kick-off on January 1st and will run until February 2nd 2019. The announcement was made during a press conference attended by the organizers, strategic partners, along with media representatives and social media influencers.

The Festival, organized by the Bahrain Tourism and Exhibitions Authority (BTEA), is held in cooperation with partners from the public and private sector such as Tamkeen, VIVA, Gulf Air and A.A. Bin Hindi Group as strategic partners.

The Chief Executive of the Bahrain Tourism and Exhibitions Authority, Shaikh Khaled bin Humood Al Khalifa commented on the upcoming Festival: “We promise nothing but the best in the fifth-edition of “Shop Bahrain”, the largest nationwide event which aims to further drive the growth of the tourism and retail sector by attracting residents and tourists from our Gulf neighbors.”

“Last edition hit a record with 19 million Bahraini Dinars of transaction value, and we are positive that this new edition will surpass all expectations. The 5th edition will serve a complete entertainment and fun experience for the whole family, and welcome many local and regional visitors. With its fulfilled agenda of various activities and offerings, as well as the huge array of valuable prizes, this Festival will supply the tourism sector with a big revenue boost, thus majorly contributing to the National Economy and advancing the local development in line with the Economic Vision 2030,” he added.

Shop Bahrain is one of the Kingdom’s major initiatives that aim to contribute to the national economy through stimulating the tourism and retail sectors. The fourth edition successfully achieved over 145,000 transactions with the value of 19 million Bahraini Dinars and more than 137,150 local and regional shoppers registered on the online loyalty system.

The loyalty system enables shoppers to enter the raffle draw and get the opportunity to win valuable prizes. For every BD 10 spent, shoppers can redeem their points through the festival kiosks located across participating malls and hotels, or via the Shop Bahrain app. With every BD 50 spent, shoppers will be eligible to win instant prizes.

It is worth mentioning that “Shop Bahrain” is a distinctive initiative with the objective of enriching the National Economy through activating the tourism and retail sectors. Last year’s fourth edition statistics indicate the vast success attained with 145,000 transactions in the value of 19 million Bahraini Dinars, and more than 137,150 of local and regional shoppers registered in the online loyalty system to collect points. The Festival has also successfully created more the 300 jobs since its inception and witnessed the allocation of 80,000 prizes, including 20 cars.

The calendar of events for the 5th edition also includes the ‘Festival City’, which will kick off on January 17th until February 2nd 2019, will be hosted at the Bahrain International Circuit, and will feature a number of activities and carnival suitable for all ages, along with an outdoor market, lives performance and music.

Participating malls will offer a unique shopping experience as well as host a large number of entertaining activities for all family members, creating an atmosphere of enjoyment and pleasure for all visitors. And to give general audience a thorough outlook on the prominent Festival, a comprehensive coverage of the different activities being held will be carried out by several well-known local and regional social media influencers, enabling more exposure within Bahraini and neighboring societies.

Executive Director of Customer Support at Tamkeen, Mr. Esam Hammad, said: “Tamkeen has always been keen on supporting the Kingdoms initiatives, especially those led by the Bahrain Tourism and Exhibitions Authority. As well as partnering with both the public and private sector. We have seen the positive results achieved by the previous editions in regards to stimulating Bahrain’s retail and tourism sector, which in return benefits the national economy and are proud to be part of it.”

Gulf Air Deputy Chief Executive Office, Captain Waleed Al Alawi commented, “We are delighted to be among Shop Bahrain’s strategic partners. Our close cooperation is in line with Gulf Air’s commitment, as the Kingdom’s national carrier, to supporting touristic and family oriented initiatives that aim to revitalize the national economy.”

VIVA Bahrain CEO, Mr. Ulaiyan Al Wetaid commented, “This is the third year of VIVA’s strategic partnership to be the exclusive telecom sponsor of Bahrain’s biggest shopping festival and be part of this national-level event that builds on the Kingdom’s exceptional tourism capabilities and positively impacts our economic and socio-cultural development.”

“Our alliance with Bahrain Tourism & Exhibitions Authority (BTEA) and Tamkeen, emphasizes on our commitment towards promoting Bahrain as an attractive regional tourism destination, unlocking a potential of tourism and retail prospects including consumer – focused experiences, employment opportunities while enabling us to engage with various community groups in the Kingdom.” he added further.

Bin Hindi Group Vice President Mr. Nawaf Bin Hindi said, “It is our pleasure to be part of Shop Bahrain’s strategic partners for the first time, and are happy to announce that we will offer a number of electronic prizes as well as 11 cars. We are keen to take part in local events and look forward to participating in the upcoming editions of the festival.”

Shop Bahrain mirrors the Kingdom’s position as an accessible family destination, renowned for its close proximity to the Gulf countries with easy access through the King Fahad Causeway and the Bahrain International Airport. The Festival will offer an incredibly diverse range of retail experiences. Shoppers will be enrolled in the Festival’s loyalty system when purchasing directly from any participating outlet and partner allowing them to win a wide range of prizes.