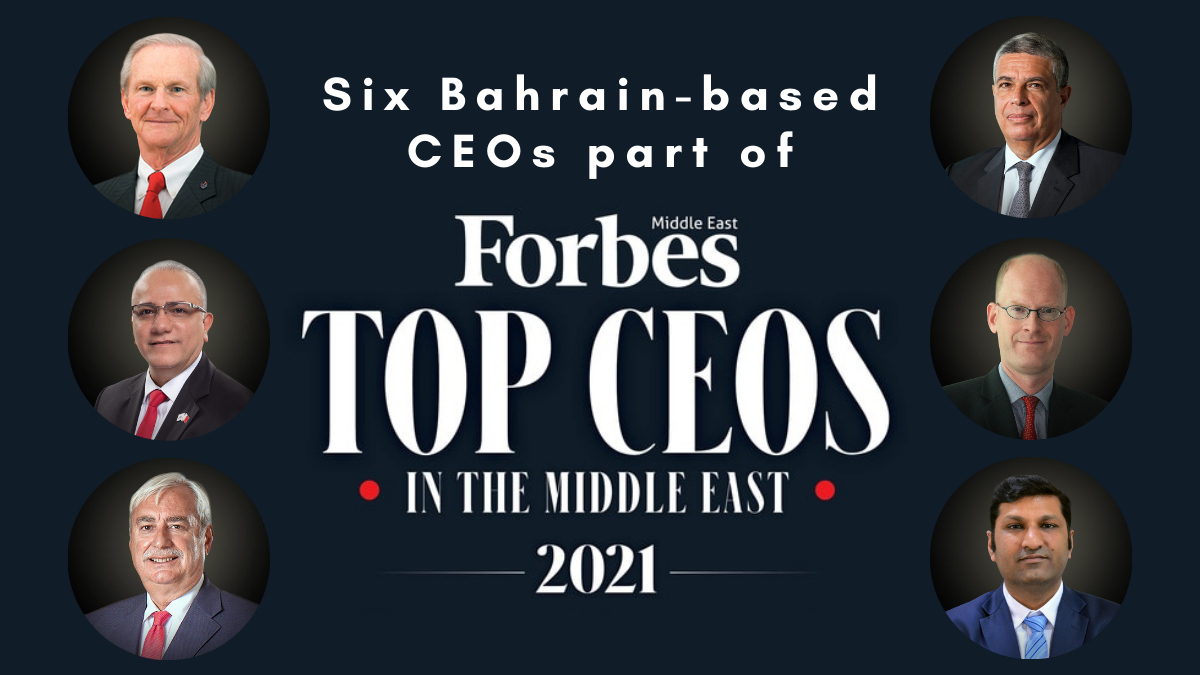 Forbes Middle East has released a list of top 100 CEOs in the Middle East. Six Bahrain-based CEO’s have been included in the list alongside CEOs spanning all industries. Forbes’ evaluation is based on the size of the CEOs company, with criteria that covers the number of employees, the companies’ progress, their personal achievements, the impact of their company on the country’s economy, and much more.

Here are the six CEO’s that have brought Bahrain to the list:

Under Eastlack’s leadership, nogaholding commissioned Bahrain’s first LNG receiving and regasification terminal in January 2020. He also oversaw the signing of a Joint Study Agreement between National Oil and Gas Holding (nogaholding) and Chevron to evaluate future gas demand and support a future supply chain for Bahrain’s Liquified Natural Gas terminal. nogaholding is spearheading the development of Bahrain’s oil and gas industry with a portfolio that includes BAPCO, Banagas, Bahrain National Gas Tatweer Petroleum, BAFCO, Gulf Petrochemical and Bahrain Gasoline Blending. Eastlack is also the CEO of Tatweer Petroleum, a member of the Society of Petroleum Engineers and an inventor with several patents.

El-Labban oversees one of the largest banks in the Middle East with a workforce of 4,000 serving 151 branches across eight countries. AUB had $40.7 billion in assets in the first nine months of 2020, with net profit of $409.3 million and $823 million in operating income. It has signed the UN’s Principles for Responsible Banking, which align global banking practices with the SDGs. El-Labban is deputy chairman for the United Bank for Commerce & Investment, and the director of the Ahli United Bank Kuwait. He was previously the vice chairman of Middle East Financial Investment Co.

Al Baqali heads one of the world’s biggest aluminum smelters outside China with a market capitalization of $1.9 billion and $6.3 billion in assets as of December 2020. Al Baqali has been with Alba for more than two decades in which time he played an instrumental role in the Alba Line 6 expansion project by securing the $3 billion for the project. Alba’s majority shareholders are Bahrain Mumtalakat Holding Company with 69.3% and SABIC with 20.6%. Al Baqali was appointed CEO in February 2020. He is also a board member of the International Aluminum Institute, INJAZ, Saint Christopher’s School and Tenmou, the first Bahraini Business Angels Company.

Batelco generated revenues of  $757.8 million in the first nine months of 2020 and recently launched Bahrain’s largest commercial sector data center with an area of 12,236 square meters. Vinter founded Virgin Mobile, Middle East and Africa in 2006 and served as its CEO until 2016. He also previously held positions with Nawras in Oman, TDC in Denmark and Singtel in Singapore. Vinter is a member of the Board of Directors of several organizations, including the Umniah Mobile Company, Sure Limited, and Dhiraagu. He is also a member of the Al Waha Fund of Funds, Limited Partner Advisory Committee.

Durand has nearly 40 years of experience in the banking and financial services sector, 30 of which he has spent in the GCC. He assumed his current position as CEO of NBB in 2016. NBB, which is the first locally-owned bank in Bahrain, operates in Saudi Arabia and the U.A.E., as well as Bahrain. It has 29 operating branches. NBB reported $287 million in total operating income during the first nine months of 2020, with growth of 17.9% compared to the same period in 2019, as well as assets worth $11.2 billion. Durand also serves on the board of directors of several professional committees in Bahrain.

Gupta joined Y. K. Almoayyed & Sons in 2006 and has around 23 years of experience. The group represents over 300 international brands including Nissan, Ford, Sony, Nikon and Toshiba. Gupta is also a member of the American Chamber of Commerce, Bahrain chapter, and the Indian Chartered Accountants in Bahrain Toastmasters club.