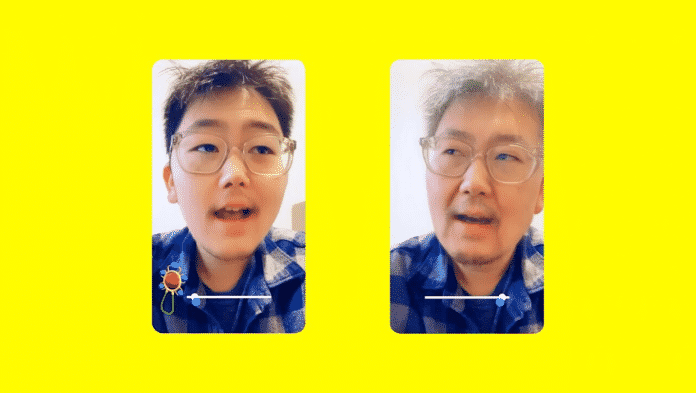 Snapchat ’s latest plan for a viral augmented reality filter takes users on an aging journey where they can use a slider to begin morphing from a toddler up to an elderly person. It mashes the success the company had with its original baby lens in May this year with Snapchat ‘s aging filter, along the lines of FaceApp’s filter, allowing users to rapidly age themselves. The lens is rolling out globally starting today and will be available from users’ lens carousel at the bottom of their camera interface. Although Snap does pay creators to build AR lenses for its platform, this lens is a Snap original, meaning an internal team built it. Seemingly, it’s primed to go viral both on and off the platform.

When Snap’s baby filter went viral this past spring, it popped up repeatedly on other platforms, like Instagram. Still, the company said in its 2019 second quarter earnings call that 7 to 9 million of its most recently added users came to the platform because of its AR filters, including its viral gender swap one. It’s easy to imagine the company wants another viral success to boost that number again.

Although Snap would probably like people to post within Snapchat, it’s not a terrible loss for them to solely have people come to the app for its AR technology — no one is doing that for Instagram. Instagram’s filters are mostly focused on making people look hotter or helping them express emotion, not performing wacky tricks. Even Snap’s commercial for the filter, which I’ve embedded above, seemingly gives people ideas for how to use the filter as a TikTok meme, syncing the lens to music for comic effect. To me, it suggests a tacit acknowledgment that people are using Snap lenses outside the app, and that’s okay.

Bahraini parliamentarians have highlighted the Kingdom’s experiences in managing the COVID-19 pandemic and the measures taken to protect society from the repercussions of the...
Spotlight

You might not be getting much use out of GoPro’s outdoor action cameras during the coronavirus pandemic, so GoPro is making it a lot...
Management Principles

In the course of disease outbreaks, swift data sharing is critical as it allows for a better understanding of the origins and spread of...
Inside Arabia