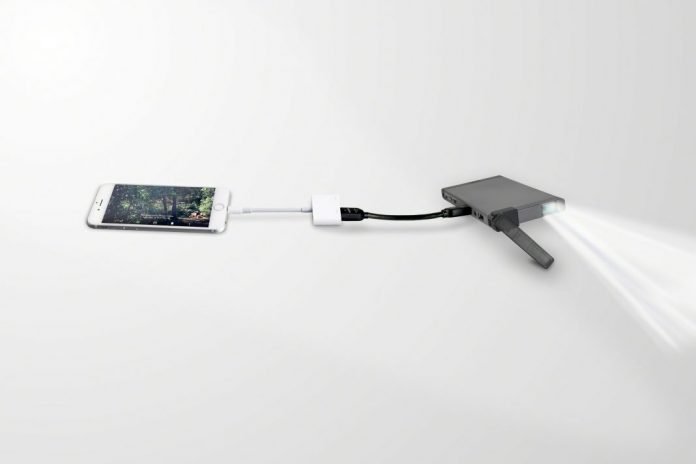 Sony is expanding its presence in the Pico Projector market with the MP-CL1A Mobile Projector.

An upgrade from the MP-CL1, this new projector offers enhanced features and accessories[1] including Bluetooth® audio out connectivity, a new colour option, a kickstand that doubles as a lens cover, as well as a carrying pouch.

The MP-CL1A Mobile Projector uses Laser Beam Scanning (LBS) which provides HD resolution (1920p x 720p) and focus free projection, contributing to its portability and lightweight of 210g. It delivers high quality and high contrast (80,000:1) imagery that enables rich and accurate colours, along with a 16:9 aspect ratio for an improved HD viewing experience.

The MP-CL1A Mobile Projector is capable of displaying a screen size of up to 120 inches at a distance of 3.45 metres, and a 40 inch screen size from 1.15 metres; making sure that it is ideal for a range of setups and scenarios. The projector is also best suited to be used in dark environments in both indoors and outdoors including camping, movie nights and gaming, home-viewing and dorm use, as well as for business presentations[2].

The MP-CL1A Mobile Projector has a number of connectivity options. Besides connecting to an output source such as laptops, Blu-ray players or game consoles via HDMI, the MP-CL1A is able to connect to a smartphone or tablet device via MHL, allowing unprecedented connectivity for work and play. At the same time, its built-in Wi-Fi (Screen mirroring)[3] function allows you to wirelessly mirror content from a smartphone or tablet device.

Another key highlight of the MP-CL1A Mobile Projector is keystone correction, which enables vertical and horizontal adjustments to maintain screen uniformity.

The MP-CL1A Mobile Projector comes with a USB cable and features a built-in 3,400mAh battery, which can also be used to charge your mobile phone or tablet via the USB port.

The MP-CL1A Mobile Projector will be available in grey and gold colours in Bahrain from January 2017 for 149 BD.

The all-new 2021 Mercedes-Benz E-Class Sedan has now arrived in the Kingdom of Bahrain. First unveiled at The Avenues – Bahrain, the 2021 E-Class...
Read more
Tech

On behalf of His Majesty King Hamad bin Isa Al Khalifa, HM the King’s Personal Representative and President of the Supreme Council for Environment...
Inside Bahrain

The National Space Science Agency (NSSA) has announced its online registration for university and high school students to participates in the NASA Space App...
iGA