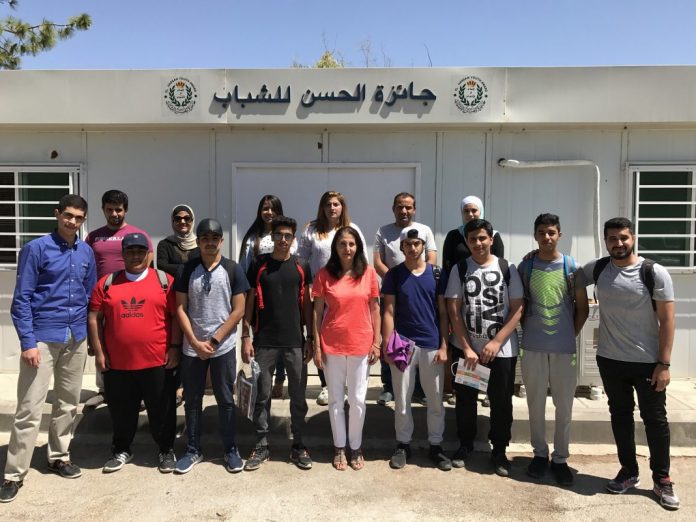 Six students from Al Mabarrah Al Khalifia Foundation’s ‘Ithra’ training program participated in the “Adventurous Journeys” program, organized by El Hassan Youth Award in Jordan. The program took place over a period of six days, from the 14th until 19th of August 2017.

During the trip, students were able to engage in a variety of activities that encouraged their adventurous spirits. They participated in a series of challenges that required physical effort, as well as enhanced communication skills among team members towards achieving their mutual objectives.

The program also included a visit to an automobile museum and other archaeological sites such as the Roman Theater, Amman Citadel, the ancient city of Petra, Ajloun Castle and the Dead Sea. Students also completed a demanding journey through mountain climbing and touring the Wadi Rum desert.

Providing this unique opportunity to ‘Ithra’ students comes as part of MKF’s strategy to encourage the spirit of adventure and discovery, in addition to the development of their sense of independence and confidence.

Furthermore, the El Hassan Youth Award and MKF’s Youth Enrichment Program ‘Ithra’ share mutual vision and goals aimed towards developing the youth, enhancing their abilities and encouraging them to reaching their full potential.

Stroba™: The modern straw for your boba

Bahrainis Sami Mohammed Ali and Abdulla Al Wardi won two gold medals in the third edition of the Heroes Taekwondo International Championship, which was...
Inside Bahrain

Bahrain International Circuit (BIC), “The Home of Motorsport in the Middle East”, has announced the launch of ticket sales for The Formula 1 Gulf...
Inside Bahrain

The Ritz-Carlton Bahrain takes guests on a culinary journey from Bahrain to Spain with the opening of its new pop-up restaurant, Vivir.

The Ritz-Carlton, Bahrain announces the launch of a new pop-up restaurant named Vivir. The exciting addition brings the fourth offering to a series of pop-up concepts on...
Inside Bahrain

Enjoy Advanced Remote Conferencing with the Latest Update of Bahrain’s Own ‘eMeeting’ system!

During these challenging times, having a reliable remote conferencing tool that caters to a wide variety of needs is essential. eMeeting, Bahrain’s first digital...
Inside Bahrain

The Housing Ministry signed the first contract of the pilot phase of the Government-owned lands’ development programme, in cooperation with the private sector. The scheme...
Inside Bahrain

The Ministry of Education has participated in the virtual celebrations of the Gulf Day for Giftedness and Creativity organized by the Arab Bureau of...
PR This Week

Mothercare – Best for Baby Offers up for grab

Mothercare, the Middle East’s premier store for parents and children, proves once again that it is undeniably the ‘best for baby’ and the best...
Inside Bahrain

His Majesty King Hamad bin Isa Al Khalifa has expressed pride in the tremendous efforts exerted by the Legislative Branch to carry out its...
© GO ALIVE MEDIA
MORE STORIES