It's common knowledge that eyes are the...
CultureInside BahrainSupreme Council for Women reviews progress of Bahraini women’s economic participation 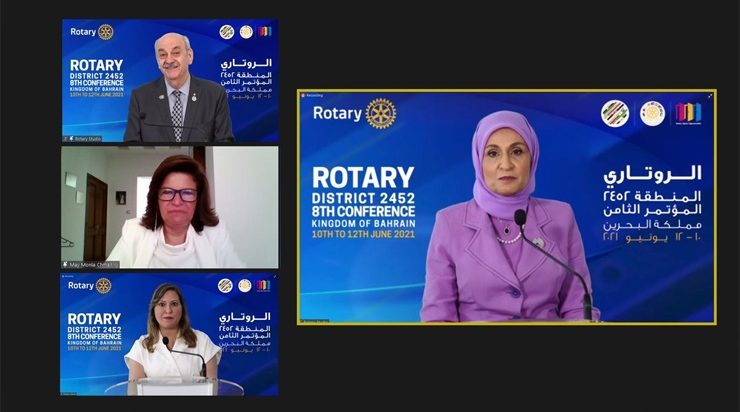 The Supreme Council for Women (SCW) has participated in the Eighth Rotary International Conference, held virtually under the patronage of His Royal Highness Prince Salman bin Hamad Al Khalifa, the Crown Prince and Prime Minister.

SCW member Afnan Al Zayani reviewed the Council’s activities since its inception nearly 20 years ago as the official national entity following up on the progress of Bahraini women, within the framework of implementing the National Plan for the Advancement of Bahraini Women and in cooperation with ministries, official institutions, private sector institutions and civil society organizations.

Al Zayani said that Bahraini women enjoy the support and backing of the wise leadership and cited the address of His Majesty King Hamad bin Isa Al Khalifa to the Parliament in 2017 in which he referred to Bahraini women moving past the traditional stages of empowerment.

She also praised the role of Her Royal Highness Princess Sabeeka bint Ibrahim Al Khalifa in leading the Supreme Council for Women, which indicates the highest levels of the Kingdom’s commitment to the empowerment of women.

The progress that women have achieved today is based on clear constitutional guarantees that reinforce the principle of gender balance, Al Zayani said.

She also emphasized that the Supreme Council for Women, since the launch of the plan, has identified women’s economic participation as a primary focus for achieving the advancement of women.

In addition, much of the progress made with regard to equal opportunities for women is due to the implementation of the National Gender Balance Model, considered as an integrated governance framework for gender balance applications through activating policies and budgets, knowledge management, auditing and monitoring, in order to measure the impact achieved at the national level.

The Council has launched several initiatives in support of women’s economic participation, including the establishment of the Women in Fin Tech Committee, the Bahraini Women Development Center “Riyadat” in cooperation with the Bahrain Development Bank, and the creation of a “Riyadat” portfolio in cooperation with the Labour Fund “Tamkeen” to develop Bahraini women’s economic participation and support small and medium commercial activities in Bahrain. It also introduced the Honour of Excellence initiative for Bahraini entrepreneurs, and launched the Bahrain Exports program to support women reach global markets, she said.

She pointed out that these initiatives boosted the Bahraini women’s economic participation, including the fact that the percentage of women owning commercial records reached 43% of the total number of commercial records in Bahrain, while it reached 28% of the total number of investors in the Bahrain Stock Exchange and that 39% of the companies that benefited from the support of “Bahrain Exports” are owned and operated by women.

Al Zayani also commended Bahrain’s efforts in confronting the Covid-19 pandemic, based on the Kingdom’s experience for more than a decade in implementing the National Plan for the Advancement of Bahraini Women and proactive initiatives that support the sustainability of their economic participation during the pandemic. Bahrain was among the first countries that implemented a nationwide work-from-home policy for mothers in the public sector through a royal directive in March 2020.

The plan has been adopted by the relevant government agencies and has been expanded to 70% of the workforce. This is in addition to a number of measures and supportive procedures that are constantly reviewed to meet the needs of individuals and business owners.

Al Zayani praised the pivotal role of Bahraini women, mothers, workers, volunteers, and in the front lines whose dedication and determination to serve and protect the lives, security and comfort of citizens and residents alike have been applauded.

Al Zayani extended her greetings and gratitude to the leadership of Bahrain and the nation’s men and women who have persevered and worked, united and harmoniously as one team, Team Bahrain.