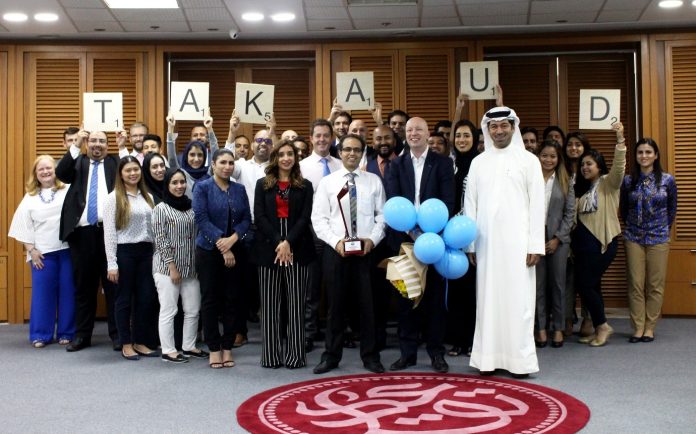 TAKAUD, the specialist provider of pensions, savings and investment solutions for the MENA region, is proud to announce that their employee Akshay Bhandarkar, an Indian National and lifelong resident of Bahrain, has been named World Champion of the challenging word game of Scrabble, winning the grand prize of US $20,000. The honour was bestowed at the semi-annual World English Scrabble Players’ Association (WESPA) Championship 2017, held from November 6 to 12 in Nairobi, Kenya.

Akshay battled from 117th place to the top in four days, besting 300 players who had successfully competed to qualify to enter the tournament and who represented more than 50 countries. Each player competed in a total of 32 games leading to the Championship final. Mr. Bhandarkar led the entire group, prevailing in 23 of his 32 games and completing the initial competitive rounds in first place by winning all of his 8 games on the final day of preliminary play. He then played best-of-seven championship games against the second-place finisher. He triumphed in the seventh and final game.

TAKAUD sponsored Mr. Bhandarkar’s participation in the event as a demonstration of the company’s belief in the training, dedication and preparation required for such a challenge, and the benefits that follow from high-level international competition. “I am very grateful to TAKAUD for the financial support,” said Mr. Bhandarkar. “I could not have done this without the support of TEAM TAKAUD.”

Asked what benefits he has gained from the experience, Mr. Bhandarkar pointed to the discipline and focus the game of Scrabble requires: “You need to be extremely focused, prepare long hours and compete regularly to do well,” he explained. “You have to be able to recall the precise spelling of any word in the dictionary while under the great pressures of time and competition. Winning this tournament has been a lifelong dream. I have played Scrabble

in Bahrain for 28 years and enjoyed every game, every challenge. After reading the dictionary, I never have trouble with spelling!”

TAKAUD’s Head of Human Resources Ms. Hawra Shubbar said, “Everyone at TAKAUD is so excited about Akshay’s great accomplishment. TAKAUD management is very proud to have sponsored him for this prestigious event. At TAKAUD we value our employees highly and we aim always to provide the best service. Akshay Bhandarkar’s win is a shining example of what our company aims to achieve in Bahrain and throughout the MENA region.”

The BBC covered Mr. Bhandarkar’s win in a 2-minute video: