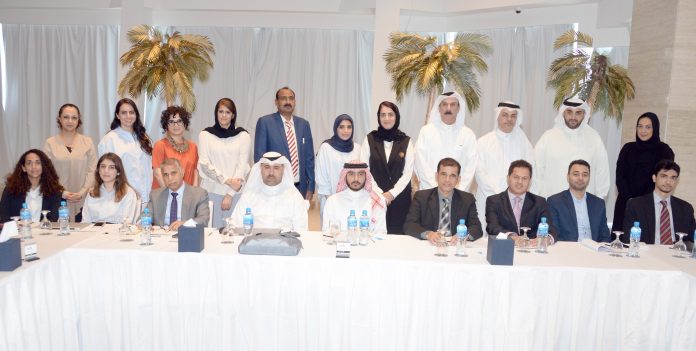 The Tender Board for the Kingdom of Bahrain today hosted a comprehensive engagement workshop with local purchasing authorities to discuss a range of proposed amendments to the tender law.

The workshop, held at the Wyndham Grand hotel, Bahrain Bay, was chaired by the Secretary General of the Tender Board HE Hayam Al Awadhi, and was attended by representatives of key purchasing authorities in the Kingdom.

It was noted that the Tender Board is continuously looking to review and refine its operations, keeping abreast of the latest developments and innovations being introduced within industry and public services, and adopting an approach of continuous improvement, growth and development.

The workshop is also one of the outcomes of the Tender Board’s development plan, as announced in November 2017, and approved by the Cabinet chaired by HRH Prince Khalifa bin Salman Al Khalifa, Prime Minister, based on the recommendation of the Government Executive Committee chaired by His Royal Highness Prince Salman bin Hamad Al Khalifa, the Crown Prince, Deputy Supreme Commander and First Deputy Prime Minister.

The workshop paid particular attention to a number of proposed amendments currently being considered to national tender law that would seek to offer a range of improvements with regards to ongoing two way communications with stakeholders, simplifying the current tender process for both contractors and purchasing authorities, as well as overcoming a number of current challenges that have been identified within the current legal framework.

In line with the directives of the Government’s Executive Committee, chaired by His Royal Highness Prince Salman bin Hamad Al Khalifa, the Crown Prince,...
Read more
PR This Week

Huawei offers users an extended warranty on a range of products. This as a precautionary measure based on recent public health and prevention considerations....
iGA

The Information & eGovernment Authority (iGA), in collaboration with the National Taskforce for Combating the Coronavirus (COVID-19), has launched the “BeAware Bahrain” application. The...
Entrepreneurial Journey

Many years ago I unfortunately had the habit of smoking. Actually I was not a chain smoker, but would enjoy five or six cigarettes...
Sports This Week

Batelco is pleased to announce the introduction of same-day Home Delivery service starting from Thursday 26-March, to support the community during the current period...
Inside Bahrain

The National Taskforce for Combating the Coronavirus (COVID-19) held a press conference highlighting updates on national efforts and strategies to prevent the spread of...
Tech

With the current situation at hand & in line with its commitment to protect its employees and the public, the Information & eGovernment Authority...
© GO ALIVE MEDIA
MORE STORIES