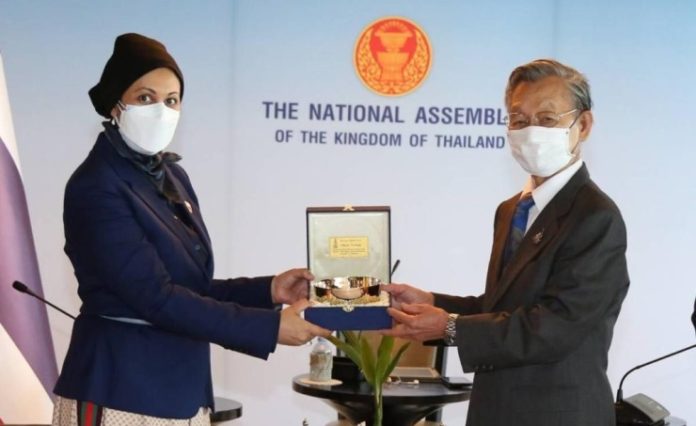 The Thai Speaker commended strong bilateral friendship and cooperation relations between the two friendly countries and peoples, stressing keenness to develop these ties in various fields and raise them to broader levels for the benefit of the two countries and peoples.

He praised Bahrain’s efforts of to support and encourage women leaders to assume leadership and decision-making positions, stressing his support for all initiatives that may contribute to strengthening the distinguished bilateral relations between the two countries.

He stressed the importance of exchanging visits for members of the Friendship Society The Bahraini-Thai Parliament, which will develop and strengthen bilateral cooperation relations between the two friendly countries and peoples.

The ambassador affirmed the depth of the strong friendship between the Kingdom of Bahrain and the Kingdom of Thailand, expressing her aspiration to strengthen these relations in all fields.

She highlighted especially tourism, trade and investment as part of the economic recovery plan for the Kingdom of Bahrain in the post-pandemic phase.

She commended the role played by the Kingdom of Thailand, which is a gateway to the Association of Southeast Asian Nations (ASEAN) and the contribution of the Thai community to the development process in the Kingdom of Bahrain.