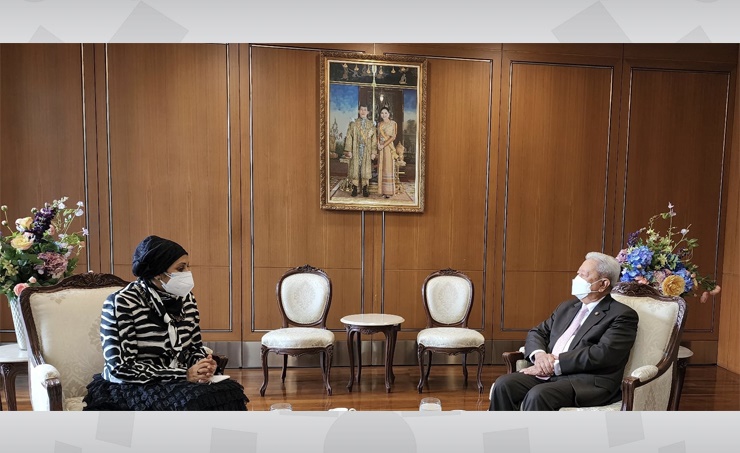 General Surayud Chulanont praised the strong relations between the two countries, stressing Thailand’s keenness to develop them in various fields.

The ambassador affirmed the depth of the strong friendship between Bahrain and Thailand that began since the establishment of diplomatic relations between them 45 years ago.

She expressed her aspiration to expand mutual visits between the two sides, especially in the fields of health, medical care, tourism, trade and investment, and to encourage Thai investors to explore opportunities for investment in Bahrain.

The Ambassador also praised the effective contribution of the Thai community in Bahrain in various commercial, social and cultural fields.

She noted the achievement made through the accession of the Treaty of Amity and Cooperation in Southeast Asia (TAC) between Bahrain and the Association of Southeast Asian Nations (ASEAN), which reflects the vision of His Majesty King Hamad bin Isa Al Khalifa in promoting dialogue with various cultures, civilizations and peoples.

She expressed her happiness with the support of Thailand and its nomination of Bahrain to chair the Asia Cooperation Dialogue for 2021-2022 under the theme “Post-Pandemic, Green Recovery in the Health Field.”

The meeting discussed strengthening the distinguished relations between Bahrain and Thailand, and ways of developing them at various levels, as well as issues of common interest.