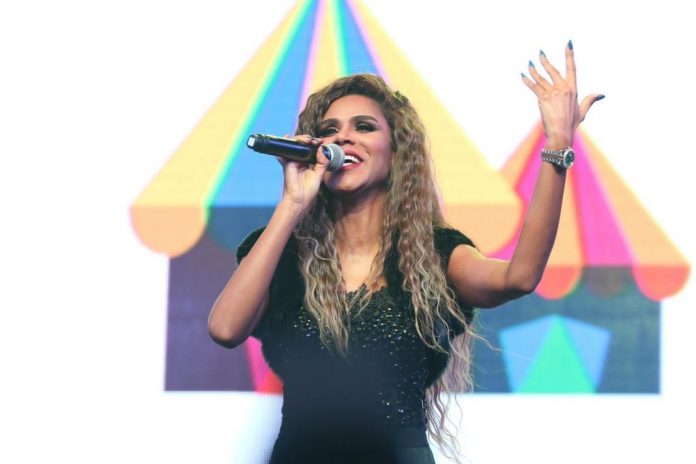 As part of ‘Shop Bahrain’ festival, the largest event in the Kingdom, ‘The Family Fair’ was held at Prince Khalifa bin Salman Park in Hidd during the New Year’s weeknd.

‘The Family Fair’ included plenty of fun-filled activities for the entire family to enjoy. It also included market stalls displaying different products, games, an outdoor cinema for kids, as well as a 60 meter high Bunjee Jumping that attracted visitors, and live performances.

Captain Reema also attended the carnival who introduced Bahrain’s top female singer, Hind to the audience from the Kingdom and the Gulf region who came to enjoy an evening of music and fun in the most exciting atmosphere.

The countdown began at midnight to welcome the New Year with fireworks that awed the audience.

‘Shop Bahrain’ aims to mirror the Kingdom’s position as an accessible and welcoming destination for families and visitors from across the region by providing a distinctive shopping experience filled with special offers and entertainment. ‘Shop Bahrain’ is the largest nationwide festival with a unique 30-day celebration of Bahrain’s heritage, hospitality and tourism offering the entire family running until 23rd January 2016.

Shop Bahrain is the Second Edition of the Bahrain Shopping Festival, an initiative developed by Tamkeen to strengthen the partnership between the public and private sectors in order to stimulate the retail and tourism industry in the Kingdom. The festival, featuring a number of events and activities, aims to attract shoppers from the Kingdom and neighboring countries – offering them a unique shopping experience focusing on family festivities. The inaugural edition of the festival launched last year under the name of “Bahrain Noor El Ain” to energize the retail and tourism sector in the Kingdom.