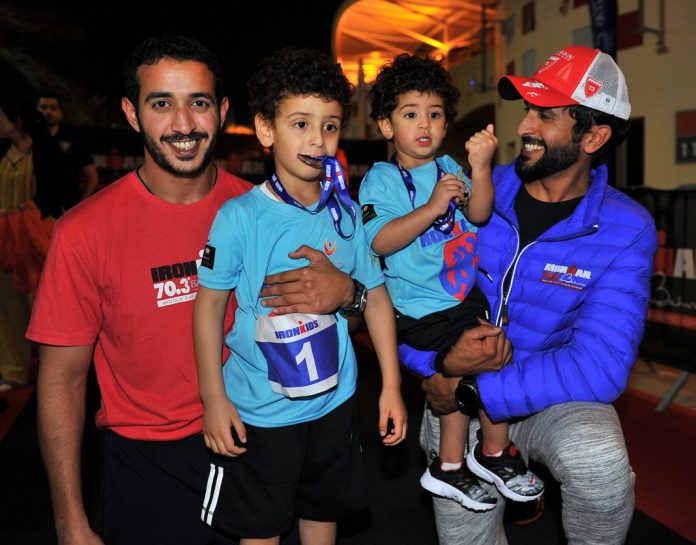 The IRONMAN THRILL in Bahrain

The IRONMAN and IRONKIDS fever that Caught Bahrain Shivering in Excitement!

IRONMAN 70.3 Middle East Championship Bahrain was more than just a sporting event. It was a weekend that kept the Bahrain chewing their nails in excitement! The event was adorned by interesting family-friendly side events, as well as a number of opportunities to see all participants in the entertaining opening and closing ceremonies.

The spotlight event began off the waters of the iconic “H” shaped building of the Four Seasons Hotel. This spectacularly designed swim, bike, and run course saw how both locals and guests got ever so close to Middle Eastern history and heritage. The flat and fast point-to-point bike route itself took participants past iconic buildings and attractions such as Bahrain Bay and the Al Fateh Grand Mosque. The bike route then headed south of the island towards the  Bahrain International Circuit, home of the annual Bahrain Gran Prix Formula One race for T2.

Needless to mention that the excitement did not end here. The Al Areen Wildlife Park is a reservation habitat for interesting Middle Eastern birds and animals. Participants  thoroughly enjoyed their run in and around the reservation before heading back after an enjoyable journey.

IRONMAN 70.3 Middle East Championship Bahrain has been the first IRONMAN event in the region, now into its second year.

Two days before IRONMAN 70.3 Middle East Championship Bahrain was dedicated to kids! Registration was limited to the first 350 registrants. The IRONKIDS
run was on December 8th at 6pm at the Bahrain International Circuit. The distances were as follows:

It is interesting to note that the IRONKIDS and IronGirl which are to be held under the patronage of Shaikh Nasser’s children are witnessing a large turnout.

Featuring a 5km-race, the IronGirl contest that commenced on December 9,  saw two-time world champion Daniele Ryf cheering the participants from the stands. IRONKIDS had various distances, and is open for children who fall in the 4-14 age group.

Commenting on the hosting of these events, Shaikh Nasser, His Majesty the King’s Representative for Charity Works and Youth Affairs, Supreme Council for Youth and Sports Chairman and Bahrain Olympic Committee President, said these events are in support of children and women participating in this prestigious championship which aims to nurture a promising athletic generation who adopt a healthy lifestyle.

Championship President Ahmed Al Hajj announced that more than 1,100 athletes of both genders living in Bahrain and outside the kingdom had registered for the IRONMAN 70.3 Middle East Championship.

The closing ceremony for these events that were hosted under the patronage of HRH Prince Salman bin Hamad Al Khalifa, the Crown Prince, Deputy Supreme Commander and First Deputy Prime Minister took place in the presence of HH Shaikh Nasser bin Hamad Al Khalifa, representative of His Majesty the King for Charity Works and Youth Affairs, Chairman of the Supreme Council for Youth and Sports, President of Bahrain Olympic Committee, and HH Shaikh Khalid bin Hamad Al Khalifa, First Deputy President of the Supreme Council for Youth & Sport and President of Bahrain Athletics Association. On this occasion, HRH Prince Salman affirmed the constant support of HM King Hamad bin Isa Al Khalifa, the King of Bahrain, to sports and youth sectors, stressing HM the King’s follow up to the achievements recorded by Bahrainis in both areas. Moreover, HRH the Crown Prince hailed the success established by the Ironman 70.3 Middle East Championship, highlighting the exceptional organisation and preparations to the event.  HRH the Crown Prince  congratulated HH Shaikh Nasser bin Hamad Al Khalifa on the successful organisation of the event, pointing out that the Ironman 70.3 Middle East Championship has become one of the sporting events that contributes in maintaining the reputation of the Kingdom of Bahrain and its abilities to host and manage different international events in the sports and youth sectors.

McLaren Automotive will bring the full force of its expertise in hybrid powertrain engineering to the supercar class next year with the introduction of...
Read more
PR This Week

In line with the Kingdom’s national efforts to limit the spread of infectious diseases, medical check-ups will be mandatory for employees in industrial and...
Read more

Bahrain’s economy recorded a slight improvement of 1.40% in constant prices in the third quarter of 2020, compared to the second quarter of the...
Inside Bahrain

KBC Bank, a Belgium-based bank with operations across Europe, US and Asia Pacific, has chosen Finastra to help manage its transition through the upcoming...
Inside Bahrain

Bahrain Raid Xtreme driver, Nani Roma, set out from Yanbu bound for Jeddah for stage twelve, the final stage of the Dakar Rally 2021. Only...
Sports This Week

Formula 1 announced that the 2021 FIA Formula One World Championship will open its season in Bahrain. This follows the postponement of the Australian...
Inside Bahrain

The Ministry of Health Bahrain has started to provide COVID-19 vaccinations at your home, the first of its kind in the region. The service...
PR This Week

Reflection is an activity that is quite commonly used in coaching. There are several ways to do it, I came across this technique which...
Spotlight

Neelanjana Bharadwaj needs no introduction for the readers of Bahrain This Week. She has inspired many readers with her weekly column “The Yoga Buzz”...
© GO ALIVE MEDIA
MORE STORIES