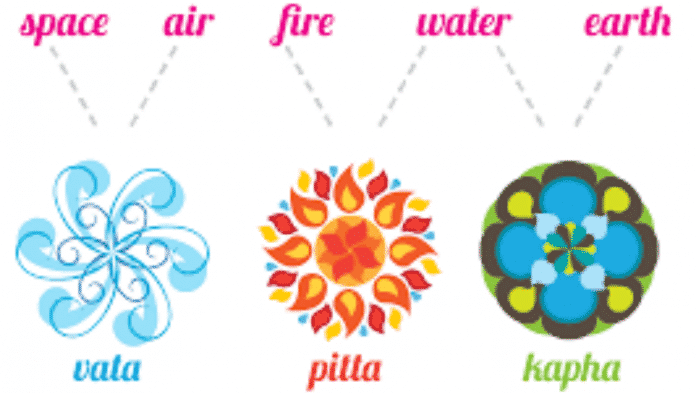 The Three Doshas in Yoga

Ayurveda which translates as “knowledge of life,” dates back 5,000 years to the ancient Sanskrit texts, the Vedas. It’s a system of healing that examines physical constitution, emotional nature, and spiritual outlook in the context of the universe. It is considered as a sister science to Yoga.

As per the ancient philosophy, the universal life force manifests as three different energies, or doshas known as vata, pitta and kapha. The five elements in nature ie earth, water, fire, air and space condense to make up the three doshas, or energy forces of the body. Every individual body constitutes of its own elemental make up of the three doshas which is as unique as fingerprints.

Though everyone has some of each of the doshas but most people tend to have an abundance of one or two of the doshas. This unique combination is determined at the moment of the conception and is like your own personal blueprint of prakriti [nature].

As one moves through life, the proportion of each of the three doshas constantly varies according to the external influences like environment, diet, climate, age, seasons etc. As the doshas fluctuate going into or out of balance they can affect one’s health, moods and energy levels.

This dominance of one or two of the energy forces explains why two people can have completely different reactions from the same thing or situation. When a particular dosha is out of balance it can be brought back into a balanced state through various methods and one of them is with the right diet and yogasana practice.

We will learn a bit more about the three doshas in the coming weeks.

Out of the six ‘rasas’ or tastes as defined in Ayurveda, the Indian science of healing, ‘Katu,’ rasa is pungent taste or very spicy...
Read more
Yoga

The ancient texts of Ayurveda consider salt among the six important tastes or rasas known as ‘Lavana’. The addition of salt to any recipe...
Read more
Yoga

When we talk about food in Ayurveda, the emphasis is more on quality and taste. There is no specific ‘ayurvedic  food’ as such but...
Read more
Yoga

‘You are what you eat.’ Ever heard this before? As per the ancient Indian Vedic science of life, Ayurveda, the food that we eat...
Read more
Yoga

‘I have a sweet tooth’, ‘I love spicy food’, ‘Tangy flavors are my thing’, and many such personal tastes in food define people’s palette....
Read more
Yoga

Ayurveda is an ancient sister science of Yoga, originating from India. It’s a form of holistic medicine focused on promoting a balance between your...
Read more