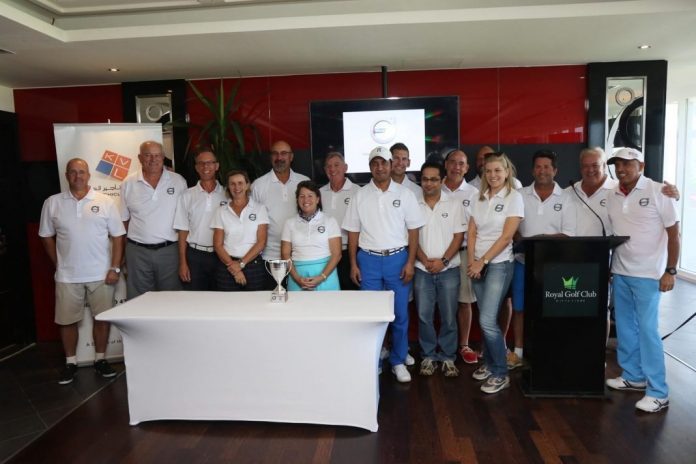 Mr. Yeon Gul Kim cruised to victory in the Bahrain Grand Final of the prestigious Volvo World Golf Challenge at the Royal Golf Club, winning with a stableford score of 36 points. Mr. Keith Watson claimed the runners up spot with a score of 34 points and Mr. Sam Jong Kim narrowly clinched third place on count back with 33 points.

Dr. Bijan Majidi, Motorcity Senior General Manager handed over the trophies to the winners. The first two winners succeeded in securing their places for next year’s Volvo World Golf Challenge Tournament. The 2016 VWGC Final will be held in May at the Prestigious Fancourt Golf Resort ranked no 1 in South Africa and 34th in the world. Both of them will receive a complimentary invitation to fly off to the 5-day World Final, an unforgettable golfing occasion and the chance to be crowned world champion.

Motorcity hosted this prestigious event for the second consecutive year in a row, in collaboration with Kanoo Vehicle Leasing (KVL) and AXA Insurance who have also continued their association with Volvo World Golf Challenge by offering an incentive to the golfers; a hole in one prize of a Volvo S80.  The prize went unclaimed on hole 16.

The 2015 challenge took place over 3 qualifying rounds from April 2015 and has seen a total participation of over 300 players. The final round was played over 18 holes at the highly acclaimed Colin Montgomerie-designed championship course.

Motorcity also displayed the recently launched all-new Volvo XC90 at the venue during the tournament. The all new XC90 is designed for demanding audiences who insist on an SUV that expresses who they are. Customers purchasing the all-new 2016 XC90 will be treated to an all-inclusive first class offer. The future value has also been considered by providing a guaranteed buyback agreement.

Owners of any Volvo would benefit from the Volvo Premier Club, a premium car ownership experience available to all new and existing Volvo car owners, regardless of car age or condition which includes a concierge service, discounts and other significant benefits through a network of partners.